Best Age To Get Married To Reduce Divorce Risk 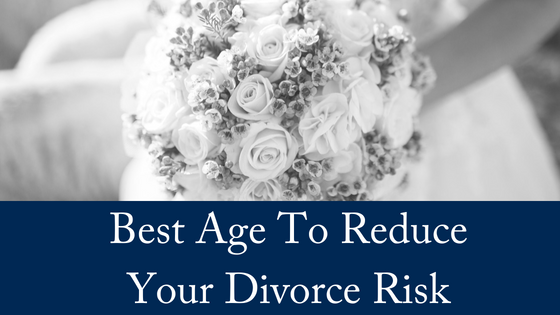 What’s the best age for marriage if you want to reduce your divorce risk? Experts from the University of Utah have revealed the best age to get hitched. The study analysed data from 2006-2010 and the 2011-2013 National Survey of Family Growth and found those who got married between the ages of 28 and 32 break up less than couples who married earlier or later.

According to their findings, fewer people between the ages of 28 and 32 ended their marriage in divorce, making it the go-to age for those thinking of walking down the aisle.

Although teens still face an elevated divorce risk relative to older adults, the analysis of more recent data shows that those who tie the knot after their early thirties are now more likely to divorce than those who marry in their late twenties.

It’s no mystery why people who marry as teens face a high risk of divorce. Along with the exhilaration of first love often comes youthful jealousy, insecurity, pressure from parents or friends, and tearful doubts about the future. For instance, someone who marries at 25 is over 50 percent less likely to get divorced than is someone who weds at age 20. Most youthful couples simply do not have the maturity, coping skills, and social support it takes to make marriage work. In the face of routine marital problems, teens and young twenty-somethings lack the wherewithal necessary for happy resolutions. What about age at marriage past the twenties? Delaying marriage from the teens until the early twenties produces the largest declines in divorce risk, for totally understandable reasons: we’re all changing a lot more from year to year as teenagers than when we’re in our twenties or thirties. Our parents and friends are likely to disapprove of a teenage marriage, but their feelings probably won’t change much once we hit our mid-twenties. Still, earlier scholarship found that the risk of divorce continued to decline past that point, albeit at a milder rate. Couples in their thirties are more mature and usually have a sounder economic foundation. Conversely, youthful marriage is correlated with lower educational attainment, which compounds divorce risk no matter how old you are.

Interestingly, if you are thinking of marrying over the age of 45, your chances of divorce increase by five percent.

it’s only recently that thirty-something marriage started to incur a higher divorce risk. It appears to be a trend that’s gradually developed over the past twenty years: a study based on 2002 data observed that the divorce risk for people who married in their thirties was flattening out, rather than continuing to decline through that decade of life as it previously had.

How can this change be explained? The first step to answering this question is to see if the pattern persists after adjusting for a variety of social and demographic differences between survey respondents. Indeed it does: thirty-something marriage continues to yield a higher divorce rate even after controlling for respondents’ sex, race, family structure of origin, age at the time of the survey, education, religious tradition, religious attendance, and sexual history, as well as the size of the metropolitan area that they live in.

With median marriage ages as high as they’ve ever been, perhaps some people who delay marriage get so used to single life that they make lousy spouses should they ever decide to give marriage a try.

This is all conjecture. But the researchers argue that beyond a shadow of a doubt that people who marry in their thirties are now at greater risk of divorce than are people who wed in their late twenties.

The lead author of the study says:

I view the newly heightened divorce rate for people who wed after their early thirties as a sort of practical pushback against the social forces that are driving up the median age at marriage. Many people who delay marriage nowadays for financial reasons marry as soon as they feel they can afford it. These are the people who wed in their late twenties, the years of peak marital stability. It’s also possible that some of the modern alternatives to marriage are too successful at siphoning people out of the marriage pool. Maybe some of the thirty-somethings who would have made good spouses now feel perfectly comfortable being single, or living with partners out of wedlock. Finally, we cannot definitively rule out causal arguments. With median marriage ages as high as they’ve ever been, perhaps some people who delay marriage get so used to single life that they make lousy spouses should they ever decide to give marriage a try.

If you’d like assistance with any aspect of separation and divorce, please contact our friendly, experienced family law team today. We offer a free, 10-minute phone consultation.