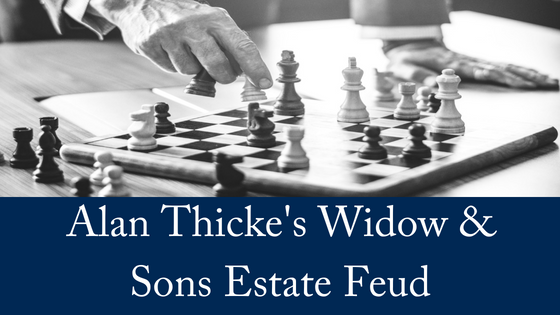 An estate feud has erupted between the widow of Alan Thicke and his sons from a previous marriage.

In the first legal battle, Alan Thicke’s widow and third wife, Tanya Thicke scored a victory in court against the co-executors of her late husband’s estate, his sons Brennan and Robin.

From his courtroom in downtown LA, Judge Clifford L. Klein ruled in favor of Tanya after her attorney Adam Streisand said that she was not going to challenge or try to overturn her prenuptial agreement.

‘Then this is a case without a controversy,’ the judge told the lawyers representing both parties, ‘I’m going to dismiss the petition without prejudice, meaning, if you have something specific, the door is open, we can address it at that point.’

Robin and Brennan Thicke filed began the estate feud in their father’s probate case in May to stop what they alleged was an attempt by their step-mother to get more than was granted to her in the prenuptial agreement she signed 12-years ago with their father Alan Thicke.

The hearing was vindication for Tanya, who said all along, she was not challenging her prenup. At the time of his death Alan was worth an estimated $40 million.

Alan’s sons received an equal share of his estate and ownership of the ranch under the terms of the living trust, which was initially drafted in 1988, and updated over the years, most recently in February of 2016.

Under the terms of her prenup, Tanya was set to receive $500,000 from a life insurance policy, 25% of her husband’s personal effects, all of the furniture at the ranch, all death benefits from Alan’s pensions and multiple union memberships, and 40% of the estate after certain bequests were handled. Tanya is allowed to live at the ranch as long as she keeps up the property and lets Alan’s sons know before any major changes are made.

In the next twist, Tanya claimed that Thicke’s sons had been recklessly spending money from his trust and had yet to hand over her portion of the inheritance. The latest allegations are part of an ongoing estate feud between Callau, Thicke’s third wife, and his sons from a previous marriage, Robin and Brennan, who are co-trustees of his estate.

The sons say they didn’t approve of a burial site monument arranged by Tanya and refused to reimburse her for it. Meanwhile, she claims Robin was reimbursed $105,000 for a memorial bash the night before Thicke’s burial that she hadn’t approved of. She also believes she’s being unfairly charged for expenses and taxes that aren’t her responsibility. And if Robin and Brennan fail to comply with her demands to be more transparent with the administration of the estate, she’s allegedly threatening to take them to court.

The sons are co-trustees of the estate, and trustees owe a fiduciary duty to the beneficiaries. That means that they have to act in the beneficiaries’ best interests and will need to account for all of the activities of the trust. If the sons are breaching their duties or otherwise misspending trust assets, they could be liable for damages. That being said, it is quite common for trustees to withhold making distributions until after the estate tax return has been filed, which is oftentimes 15 months after the date of death. This is particularly true in contentious relationships.

Can You Prevent An Estate Feud?

There are several ways this situation can be avoided; although you may never fully be able to prevent an estate feud over your will.

When making a will, you should seek advice from a specialist in wills and estates. Something they will always do is check for evidence of mental incapacity and keep detailed notes of whether they believe the will maker is of sound mind and knowledge when the will is executed.

A skilled lawyer will ensure the will maker is not be influenced by a family member or friend to make a will he or she doesn’t really want to. A specialist in wills and estates can give advice in making a will in a situation where there is a blended family. This will protect children from a previous marriage from losing their inheritance and reduce the likelihood of a bitter dispute upon the death of a will maker.

Choose a beneficiary you trust to financially provide for your spouse and your children. A testamentary trust will protect your assets for your children from your first relationship.  It’s tempting to assume that your new spouse will ‘do the right thing’, but we have seen this assumption proven wrong countless times.

For further information about estate planning or if you have an estate feud, please contact us today. We offer a FREE, 10-minute phone consultation.