ARE ALL YOUR CHILDREN REALLY EQUAL? The equality problem and the hotchpot clause solution to unequal distribution of your estate. 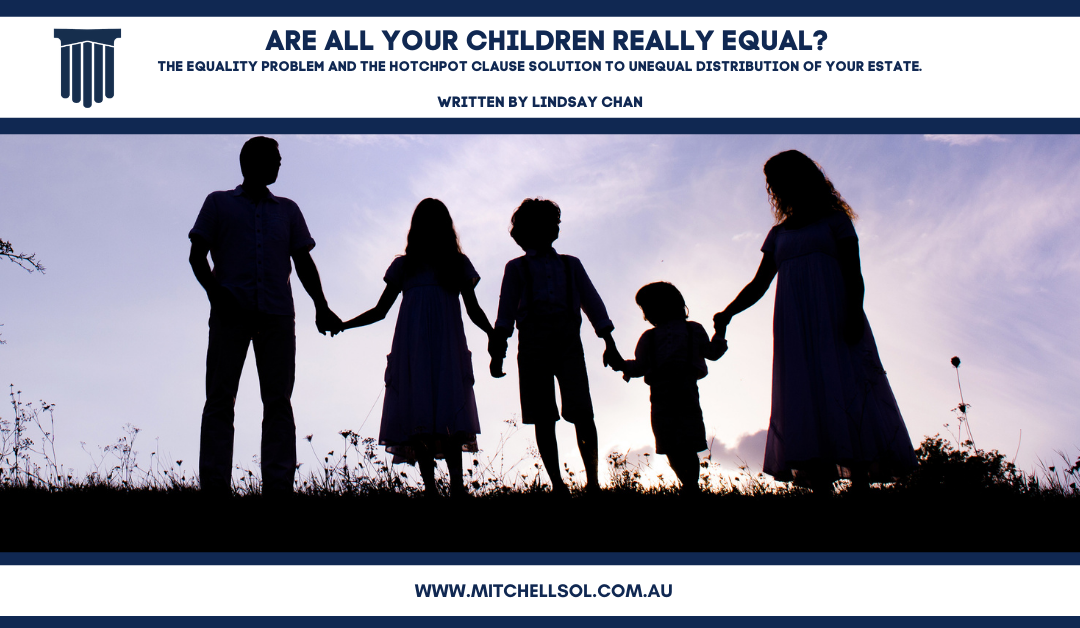 ARE ALL YOUR CHILDREN REALLY EQUAL?

The equality problem and the hotchpot clause solution to unequal distribution of your estate.

Despite the usual family jokes about the favourite child, when it comes to estate planning, parents will usually go to great lengths to ensure all their children are treated equally in their will. But what happens when one child has been given more financially during your lifetime than the others — it might be an equal distribution of your estate, but is it fair?

In his will the father gave a house (worth about $1.7 million to $1.9 million) and $50,000 to one son, and the rest of his estate to the other son. The four daughters received nothing other than a note from their father in the will which said about his daughters  “I have been instrumental in them being well provided for in my lifetime even to the extent of three home units each in the year 2006”.

The daughters had indeed been given three home units by their father but these hadn’t come out of his own personal estate but out of  a family discretionary trust controlled by the father as a director. In addition the value of the units split between the four daughters was $352,500 each. Much less than the millions left to their two brothers.

Two of the daughters made a Family Provision Claim for more money from the estate but this was rejected by the court who held that it was not satisfied that adequate provision for the proper maintenance, education or advancement in life of the daughters HAD NOT been made by the will of their father and that the father did provide significantly for his daughters during his life, in terms of their private schooling, assisting with education expenses for their own children, and assisting with loans to provide property.

The courts in their decision noted that where a child, even an adult child, falls on hard times, and where there are assets available, then the community may expect a parent to provide a buffer against contingencies but although some may hold the view that equality between children does not discriminate between children according to gender, character, conduct or financial and material circumstances, the Succession Act is not consistent with that view. To the contrary, the Act specifically identifies, as matters that may be taken into consideration, individual conduct, circumstances, financial resources, including earning capacity, and financial needs, in the Court’s determination of an applicant’s case.

In Estate Ameisen, Deceased [2020] NSWSC 528 the courts reiterated this ‘unequal approach’ to claims made by children under the Succession Act.

Maya Ameisen, died in 2018, aged 97 years, leaving two children Paul and Helena. In her 2015 will Maya left the following to her children:

To Helena, the two properties in Bondi Junction and one property in Bondi (with a total current net realisable value of $3.851 million), together with 50% of her cash assets;

To Paul one property at Bondi (with a current net realisable value of $1.259 million), together with a sum of $14,000 and an annuity of $66,000 payable in monthly instalments of $5,500 subject to annual Consumer Price Index adjustments, from a fund which is expected to be exhausted in or about October 2023;

In addition a further gift was left to Paul’s son, her grandson, of  $50,000 with accrued interest when he attained 25 years of age.

Paul made a claim under The Succession Act 2006 (NSW)  on the basis that his mother had always treated both her children equally and yet Helena had received more than him in the will.

During the case it became clear that Paul had received a number of financial benefits from his mother during her lifetime including:

Helena had received nothing.

Not surprisingly, Paul’s application was dismissed by Lindsay J, who concluded that Maya had indeed wanted to treat her children equally, but Paul had already drawn down on his presumptive inheritance in his mother’s lifetime, whilst Helena had not.

The two cases above are clear indications that in Family Provision Applications the court will not consider equality between siblings but individual conduct, circumstances, financial resources and financial needs alongside the adequacy of the legacy to meet those needs.

If the thought of your estate being used up in court fees by a child who feels wrongly that they’ve been treated less than equal is too much to bear, then the answer lies in some pre planning and advice from an expert professional when it comes to drafting your will.

Keeping records of lifetime financial support given to each of your children and including this with your will along with a written explanation of your decision like Benedict Chan did in the first case above will go some way in avoiding a Family Provision claim being made.

A Hotchpot clause inserted into the will takes account of any lifetime gifts so that on your death your executors are required to search for any records of gift or loans you made to the beneficiaries of your will. The executors are then required to reduce the gift made by the will by the amount gifted, or outstanding, and distribute this sum to the other beneficiaries.

By seeking advice before your will is written you can make sure that the gifts you leave your children are not just equal but also fair, avoiding the need for favourite child arguments in the court following your death.