Buyer Deposit Refunded Due To Murder 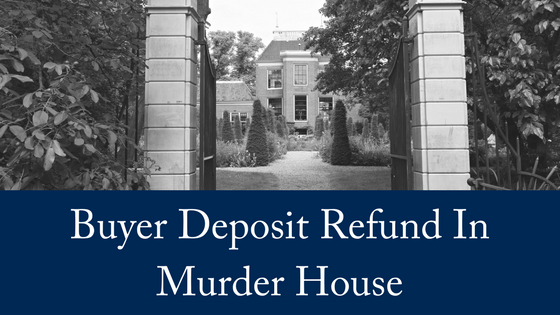 When Feng Yun Shao agreed to pay $6.1 million for a sprawling mansion, in Vancouver’s upscale Shaughnessy neighbourhood, she had no idea an alleged Chinese triad leader had lived there before he was gunned down at the front gate. A judge agreed that her buyer deposit ought to be returned.

Shao backed out of the 2009 deal when she learned the house’s history, and a Supreme Court judge agreed Shao had been misled and was not in breach of her contract when she reneged.

Justice Paul Pearlman wrote Friday that the home’s previous owner, Mei Zhen Wang, had relied on “fraudulent representation” to sell the house, and ordered her to return Shao’s $300,000 buyer deposit — plus interest.

Two years after Huang’s death, Wang put the house on the market. She had decided to permanently return home to China, the court heard.

But when Shao visited the property as a prospective buyer and asked why the current owners were selling, she wasn’t told anything about the killing. All she learned was that a member of the family was switching schools to improve her English, according to the decision. “That representation, while true on its face, was incomplete,” the judge wrote. “It concealed the fact that Ms. Yuan’s daughter changed schools as a result of Mr. Huang’s death, and that the death was a factor in the plaintiff’s decision to sell the property.”

Five days after Shao paid the deposit in full and the conditions were removed from the contract, she heard rumours of what had happened at her new house, according to the decision. Her husband Googled the address and discovered the full details.

Shao told her lawyer she was pulling out of the sale, and her lawyer wrote a letter accusing Wang of failing to disclose a hidden defect of the home.

Is a Buyer Deposit Refunded in Australia in Similar Circumstances?

Tim McKibbin, CEO of the Real Estate Institute of NSW (REINSW), says the rules around selling a house with a history provoke interesting questions.

“’A material fact’ is the way we refer to it here,” said Tim.

In 2004 the Sydney home in which Sef Gonzales murdered his family was sold to some buyers who were unaware of its tragic past. Once they found out about the home’s history, they didn’t want to proceed with the purchase. This prompted a review of the NSW laws surrounding disclosure. The agent had to refund the buyer deposit, and the home was later sold for less than the original price.

The law changed as a result of that review and real estate agents must now disclose any ‘material fact’ before they can sell a property. But what actually constitutes a material fact isn’t always clear.

After Sydney businessman Michael McGurk was shot dead out the front of his Cremorne home in 2009 the papers followed not only the crime story, but also posted the photos of his home when it came up for sale some time later.

An agent is required to disclose a death if it happens within the legal definition of the property. In the McGurk case the death happened outside the property, on the road, so there was no declaration required.

Buyer Deposit May Be Refunded in Other Circumstances Houses with histories come in many forms – it’s not just crime scenes that put buyers off. It could be untenable situations with neighbours, drug dealers’ houses, or having known sex offenders living nearby.

“What is a material fact?” asks Tim, who says that the REINSW have been seeking clearer answers from the NSW Government on several issues.

“We live in a culturally diverse country and superstitions are very real to some people. Things that concern one group of people won’t affect another group. We keep asking, but we don’t get an answer because no one knows.”

So what constitutes a traumatic event in a home’s history changes depending on who you speak to and varies in importance over time, opening a can of worms for agents, vendors and buyers alike.

All jurisdictions around Australia have legislation governing real estate agents in practice but unfortunately, none of them is uniform. Tim suggests that the disclosure could instead be captured in the contract for sale of land, in much the same way a prospective buyer has their conveyancer or lawyer make enquiries about mortgages or easements to ensure the land isn’t encumbered.

If you need assistance with the purchase of a property or a contract, you’ve come to the right place! We are experienced in all aspects of property law. Contact us today for your FREE, 10-minute phone consultation.