How Education Can Reduce Your Risk of Divorce 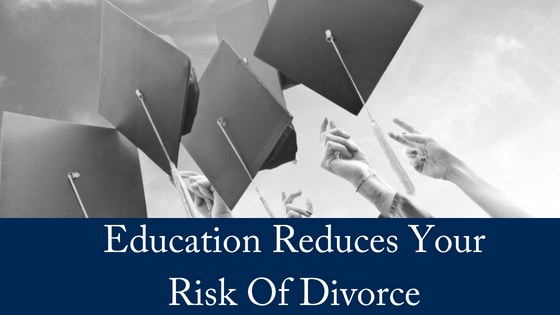 New studies have found that the more highly educated you are, the lower your risk of divorce.

Researchers at the National Center for Health Statistics estimate that 78% of college-educated women who married for the first time between 2006 and 2010 could expect their marriages to last at least 20 years. But among women who have a high school education or less, the share is only 40%.

The probability of a lasting first marriage is derived from marital history data from the National Survey of Family Growth, a nationally representative sample of women and men who were ages 15 to 44 between 2006 and 2010. Estimates are based on an approach similar to that used to determine life expectancy and assume that marriage patterns in the future will follow patterns today. Marriages that ended in death were not included in the analysis.

One limitation of the survey was that it did not include adults over age 44 and therefore does not take into account long-term marriages that started later in life.

The findings are yet further evidence of the marriage gap in the U.S. along educational lines. College-educated adults are more likely to be married than less-educated adults. Among those who were ages 25 and older in 2014, 65% of those with a bachelor’s degree or more were married, compared with 53% of adults with less education, according to a Pew Research Center analysis.

While the research does not address reasons these marriages last longer, we do know college-educated adults marry later in life and are more financially secure than less-educated adults. These factors may also contribute to a lower risk of divorce. While more-educated women have the highest chances for a long-term marriage, college-educated men also stand out. Roughly two-thirds (65%) of men with a bachelor’s degree could expect that, if they marry, their first marriage will last 20 years or longer, compared with 50% of men with a high school diploma or less. In addition, men with a higher level of education are more likely to get married in the first place when compared with less-educated men.

Similar findings have been found in the United Kingdom. In a recent study published in Demographic Research, Diederik Boertien and Juno Härkönen question whether family strain fully explains why British women with more education have a reduced risk of divorce.

It’s easy to imagine that the more educated experience lessen family strain: educated folks tend to be wealthier. Thus, they’re less likely to fight about money or the budget and may be less likely to face strains like unemployment. However, it only explains about one-quarter of the lower risk of divorce among the more educated. That is, Boertien and Härkönen found that the greater resources of the better-educated did, in fact, enhance marital satisfaction, but most of the marital stability advantage associated with education remained unexplained.

Boertien and Härkönen introduce the question of whether the more educated are more constrained by other barriers to divorce than the less educated. Goode’s conception was that family strain would dominate reasons for splitting up after divorce became widespread, but Boertien and Härkönen focused on barriers created by having resources, rather than not having them—resources that make the risk of divorce lower for a given amount of family strain.

They identified two “assets” that explained about one-quarter of the lower risk of divorce among more educated women in their study: home ownership and having married parents. Note that higher barriers to divorce explained as much of the marital stability advantage among the educated as a family strain model did. Home ownership can be explained in practical terms: either people are less likely to divorce if they have a valuable joint asset that must be divided somehow, or people with more confidence in their marriages are more likely to invest in a home.

Like homeownership, the asset of never-divorced parents is distributed along class lines. Both because poverty really does increase family strain, and because children raised in intact homes generally have higher educational attainment, those who enter marriage with less education are also less likely to have been reared in an intact union. In Boertien and Härkönen’s terminology, they have lower barriers to divorce.

Today, the “freedom” to dissolve any marriage means the less educated have their disadvantage from family strain compounded by not having married parents to also serve as a “barrier to divorce.” So, while we could blame the victim’s parents for not setting a good example or blame the victim for not overcoming having been socialized to split when there are difficulties, we must recognize that the poor suffered disproportionately when there was low access to divorce, and they are suffering disproportionately now that there is high access to divorce. Perhaps it is overly optimistic to imagine that a divorce culture somewhere in the middle would be less social stratifying, but I think it stands a better chance than today’s situation. Neither creating equal access to homeownership, nor equal access to having married parents is easy, but the evidence from this UK study suggests that both could help.

If you need assistance with separation and divorce, give our friendly and experienced team a call today. We offer a free, 10-minute phone consultation.