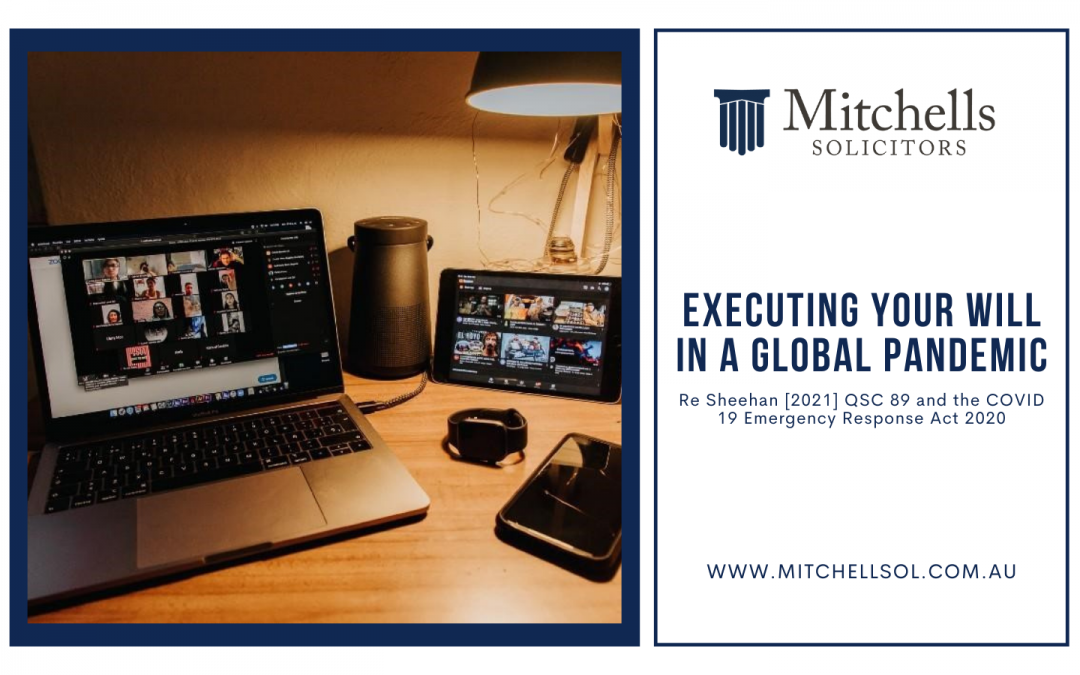 Executing Your Will In A Global Pandemic

There’s nothing like a global pandemic to turn your mind to all those tasks that you’ve been putting on the back burner for years, including finally writing a will. The irony is though, that although you might be willing to finally tick making a will off your to-do list, the laws around the execution of wills weren’t designed for social distancing, making it a lot harder than before to get your will properly witnessed and signed.

Which is why the Covid 19 Emergency Response Act (Qld) was brought into effect on 23rd April 2020 which aims to facilitate the continuance of judicial process and other activities disrupted by the COVID-19 emergency, by easing regulatory requirements including the execution of wills.

Regulation 7 of the Act provides modifications around the rules in relation to signing and witnessing wills as follows:

A requirement under the Succession Act 1981[Qld] or another law for the presence of a witness, signatory, substitute signatory or other person in relation to the making, signing or witnessing of a will is taken to be satisfied if —

(a) the witness, signatory, substitute signatory or other person is present by audiovisual link; and

(b) the making, signing or witnessing of the will is carried out in accordance with part 4.

Whilst Section 17 in part 4 provides the general requirements for witnessing documents.

A document may be witnessed by audiovisual link only if —

(a) if applicable, the witness observes the signatory direct the substitute signatory to sign the document; and

(b) the audiovisual link enables the witness to be satisfied, by the sounds and images made by the link, that the signatory or substitute signatory is signing the document; and

(c) the witness observes the signatory or substitute signatory signing the document in real-time; and

(d) the signatory or substitute signatory signs each page of the document; and

(e) the witness is satisfied that the signatory is freely and voluntarily signing the document or directing the substitute signatory to sign the document.

In July 2020 Mr Loveday retained solicitors on behalf of his friend, Stan Sheehan, who had recently been diagnosed with a brain tumour and wanted to make an Enduring Power of Attorney as well as a new will, but was currently in hospital, meaning that his solicitor could not visit him. An initial zoom meeting took place between the three parties and a number of further conversations took place before Stan successfully executed his Enduring Power of Attorney on 15th July 2020.

Stan’s estate was fairly complex with 41 beneficiaries and he had a number of decisions to make in relation to the disposal of his estate. He told his solicitor that he would mull it over and get back to her when he was discharged from hospital. The solicitor tried to request instructions on a number of occasions but didn’t hear back until 26th October when Mr Loveday got in contact to say that Stan was back in hospital and was about to undergo brain surgery. The need for a will was now urgent and a zoom meeting took place on the 30th October with Stan and Mr Loveday present together where final instructions were provided.

Stan’s surgery was scheduled for the 3rd November and his solicitor was able to urgently prepare a draft will by the 1st November, which was emailed to Mr Loveday, who printed off the will and took it to Stan in hospital, with a further zoom meeting scheduled for the 2nd November, to execute the will following the procedure set out in the Covid 19 Emergency Response Act.

The Zoom meeting on the 1st of November took place between Stan and Mr Loveday in the Gold Coast Hospital and the solicitor and her administrative assistant, who were together in the office. The meeting was recorded.   During the meeting the following questions were asked by his solicitor:

The will was then scanned and emailed to the solicitor who witnessed the document along with her administrative assistant at 7:38 pm that same day.

The Covid 19 Emergency Response Act had allowed Stan to express his final wishes and have his will executed without having the witnesses present.

However,  the administration assistant noticed later that evening that despite all precautions taking place page 5 and the schedule to the will had not been signed by Stan. Mr Loveday was urgently contacted the next morning and it was agreed that a fresh unsigned copy would be sent across to him for re-execution of the will to take place when Stan came out of surgery. Unfortunately, Stan didn’t recover from his surgery enough to re-execute the will and ultimately died without a properly executed will.

Mr Loveday and Stan’s brother Noel had been named as executors by Stan and they made an application to the court under S18 of the Succession Act 1981 (Qld)  to admit the document to probate. The irony of this is that the usual rules around execution would have allowed probate without an application as there’s no requirement under Sec 10 of the Succession Act for every page to be signed individually.

In deciding to allow probate for a document under S18 of the Succession Act, the court is guided by 3 questions:

And here’s where the excellent audiovisual recordings that the solicitor had made came into play because there was clear evidence that there was a document and that Stan had made it clear throughout the recorded conversations that the document covered his intentions for the estate and this document would be his last will.

It even answered any questions around Stan’s testamentary capacity at the time of making and executing his will as the video showed he was giving clear instructions and understood the implications of the document he was signing. The court allowed the document to be admitted and probate was granted with all 41 beneficiaries giving a sigh of relief.

Stan’s solicitor followed the new Emergency Response Act rules around the execution and witnessing of a will and still a mistake occurred (but not of her doing). Imagine how much harder it would be to execute and witness your will properly if you didn’t have expert legal advice on your side.

Nonetheless, the lessons, in this case, lies less in understanding the new rules to be followed in the execution of will under the COVID 19 Emergency Response Act 2020 and more about the necessity of making a will while you are young fit and healthy rather than waiting until time isn’t on your side and missing the chance to rectify any errors that may occur whilst navigating social distancing legal procedures.