How To Use Science To Prevent Divorce 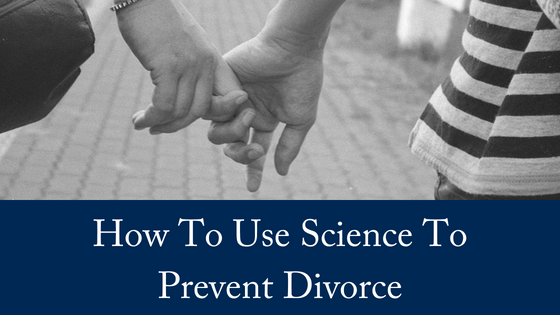 If you’re thinking of entering into a serious relationship or contemplating marriage, you may be interested to know that science has come up with some accurate ways to predict divorce. These predictions have way higher accuracy than you might think — and the best news is that you can use that knowledge to prevent divorce.

One of the most successful of these researchers is Dr. John Gottman, an American psychological researcher and clinician who set out to find whether there were really patterns of behavior, or sequences of interactions, that could differentiate happy and unhappy couples. His research ended up achieving over 90 percent accuracy in predicting divorce, and to this day is among the most replicated in the family research field. And while it may seem overwhelming on the surface to look to scientific studies to understand your relationship, Dr. Gottman’s findings are easy to apply to a large variety of romantic relationships.

When you begin to understand the science behind their relationships, you may be able to find success that otherwise seemed unattainable. The behaviours that prevent divorce are often shockingly simple.

In an argument, in might seem natural for the negative to outweigh the positive. That can feel like an obvious part of conflict. But for the most successful couples Dr. Gottman researched, the positive moments outweighed the negative in an argument at a ratio of five to one. Dr. Gottman calls this “The Magic Ratio” — where moments of lightness and humour still continue, even as a couple discusses a point of conflict between them.

For couples who ended up getting divorced, the ratio between positive and negative moments was one to one or less. Dr. Gottman’s research suggests loving moments like holding hands, making jokes, empathizing, and apologizing. These tiny things can help keep your relationship strong.

Don’t Start Arguments On The Attack

Starting an argument off with an attack — what Dr. Gottman calls a “harsh start-ups” — can be an indicator of future divorce.

Dr. Gottman suggests that the overall nature of an argument can be determined by simply listening to the first three minutes. Starting an argument more like a discussion, and focusing on positives before getting into criticism is another way to prevent divorce.

Language that relies on “always” or “never” thinking is rarely helpful in a relationship.Speaking in absolutes, it turns out, especially as a form of criticism, is actually a predictor of divorce. “Giving the partner negative trait attributions” is one of the most telling relationship habits that leads to divorce. On the contrary, successful couples avoid language like “you always make things about yourself,” and “you are so self-absorbed” and instead offer concrete examples of when they were hurt. While the first three minutes of an argument are vital, it’s also important to avoid contemptuous, hurtful language in general — even in the middle of a conflict in your relationship. Dr. Gottman called these “statements that come from a relative position of superiority,” the greatest predictor of divorce.

Couples who stay together don’t say things like “you’re an idiot” or indicate an unkind hierarchy in their relationship. Rather, they remember that they are partners, through and through, on equal playing field.

Couples who are less likely to get divorced do not attack one another, but they also do not frame themselves as the ones being attacked. Dr. Gottman calls this behavior defensiveness: “self-protection in the form of righteous indignation or innocent victim-hood.” Saying something is the other partner’s fault, or assuming that your partner is on the attack, is a form of defensiveness.

For those who Dr. Gottman considers less likely to get divorced, language is more empathetic and forthcoming. Partners own up to their mistakes, instead of shoving the blame onto their loved one.

Don’t Stonewall One Another

The silent treatment is something best left in childhood. But some couples still resort to an emotional silent treatment: stonewalling. Dr. Gottman calls this “emotional withdrawal from interaction.” This could look like shutting down, turning away, or texting during conversations.

More successful couples, on the other hand, don’t stonewall. They practice active listening, and find ways to show each other they care, even when things are rough.

How couples show interest in their partners’ lives, and respond to their partner’s interest, is a major divorce predictor, according to the Gottman Institute. Asking questions about their day-to-day lives, making attempts to connect to each other regularly, talking about feelings, and even discussing your worldview can help keep your connection strong.

Simply trying to fix things after something has gone wrong, or accepting when your partner tries to fix things, is a major indicator that your relationship might be built to last. Gottman’s research shows that repairing negative interactions is important.

Couples in distress, it’s worth noting, may attempt these sorts of interactions, but not be able to accept their partners offers. Strong couples, on the other hand, both offer and accept repair attempts from their partners.

Always Go Back To Kindness And Generosity

Dr. Gottman expressed that kindness and generosity are two factors that really matter in relationship longevity. If you and your partner can always find a way to be kind and generous with one another, then you’re likely on the road to success.

While Dr. Gottman is one of the most successful researchers in this field, no one scientist or theory can predict with complete accuracy whether a specific couple will get divorced or not. What this kind of research can do, however, is find common threads among the strongest couples.

However, if you need assistance with separation and divorce, please contact our friendly, experienced team today. We offer a FREE, 10-minute phone consultation.