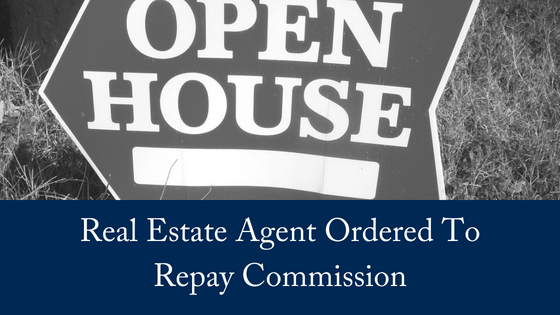 A real estate agent has been ordered to repay $81,000 in commission to a 93-year-old woman on the sale of her home in Victoria.

Globe Real Estate had Maria Sutherland sign an exclusive sales contract after telling her that her home could be sold for more than $1.25 million. The fine print said that the commission was 2.2% of the selling price, but only up to $1.278 million. If the property sold for more than that, 50% of the difference in sale proceeds would go to commission.

The property was sold after a month on the market for $1.385 million, which added up to an $81,000 commission for the real estate agent. In Victoria, there is no cap on commissions, but the Sutherland family decided to take legal action anyway. Tiered commission arrangements can be an incentive for an agent to achieve a high sale price, but the Sutherlands argued that a 50% split was unusual and excessive.

Maria Sutherland’s son and litigation guardian, Gregory Sutherland, also claimed that the real estate agency had taken advantage of his mother, who had a cognitive impairment. Associate Justice Mark Derham said in the ruling that:

It seemed self-evident that no rational person in the position of the plaintiff in this case with a residential property…would, if properly in possession of their senses, enter into a commission agreement of that kind.

The Federal Court found Fletcher and Parker (Balwyn) breached consumer law in 2015 by falsely advertising the price of properties, engaging in misleading or deceptive conduct, and by making “false or misleading representations about the sale of land”.

The court stated the realtor’s offices in Blackburn and Canterbury knew houses would sell for much more than the advertised price, and the scheme had gone on for a number of months.

The agents would use the false advertising in magazines, flyers and email responses in the hope of luring more potential buyers.

Consumer Affairs Victoria said the courts had handed down more than $1 million in penalties in the past fortnight. Fletcher and Parker was caught out after a taskforce from Consumer Affairs Victoria looked into sales and the corresponding advertising.

Company chief executive Bradley Brown apologised for the “unacceptable conduct by a few members of our team”.

“This type of behaviour went completely against everything we stand for as a business and how we treat our customers,” he said in a statement.

The Minister for Consumer Affairs, Marlene Kairouz, said the department would continue to crackdown on the misleading behaviour. “Underquoting is dishonest, misleading and against the law — and today’s decision shows that if you do it, you’ll pay the price,” she said.

She said the practice preyed on hopeful homebuyers, and the increasing number of fines sent a clear message. “This outcome will give homebuyers the confidence that this dodgy practice is being stamped out,” she said.

The eastern suburbs agency must also implement a program to educate its agents about their legal obligations and appoint a compliance officer to ensure that the program is effectively maintained.

As part of the punishment the company must acknowledge their contraventions in the local newspaper where they advertise, on property websites and display a notice in their office for six months.

The president of the Real Estate Institute of Victoria (REIV), Richard Simpson, said the Fletcher and Parker case related to offences that occurred before new underquoting laws came into effect in May last year.

He said the new legislation had provided greater consistency in the way properties were quoted across Victoria.

Mr Simpson said the REIV welcomed the prosecution of estate agents who deliberately flouted the law.

Property law lawyer Tim O’Dwyer says that you should always have agent’s contracts vetted by a solicitor independently to avoid these situations. “Invariably the so-called ‘standard’ forms which agents will want you to sign are essentially agent-friendly documents loaded with cunning clauses that are not at all in your interests,” says Tim. “Let us check out the agent’s paperwork, explain the implications of what your agents wants to bind you to, then let us cross out the offensive and obnoxious terms before adding our own seller-protective clauses.”

Commission disputes are our specialty. If an agent is claiming commission on a sale the agent did not make, or if two agents are both wanting commission as the ‘effective clause’ of the one sale, you are in deep trouble. But we’ve seen it all before, and know intimately both the loopholes and defences available to you as well as the consumer-protective obligations with which agents must strictly comply.

For your FREE, 10-minute consultation, please contact us today.