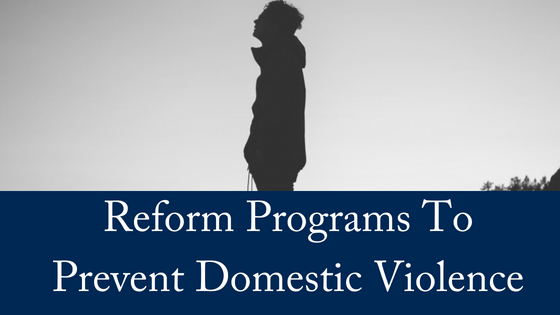 Behaviour change programs have, in recent years, come to play an increasingly important role in efforts to prevent domestic violence, says Professor Andrew Day at the Deakin University’s School of Psychology.  The rationale for intervening with known perpetrators is based on an understanding that violence in intimate relationships often persists over time and that interventions that have even a modest impact on behaviour can, therefore, have significant value.

Although current definitions of domestic violence do not assume that all violence is perpetrated by men on women, the results of the Personal Safety Survey (Australian Bureau of Statistics, 2013) suggest that more women than men are victims, with one in six Australian women reporting that they have experienced physical or sexual violence from a current or former partner. However, violence that is perpetrated by women (or in same sex relationships) is by no means uncommon and should not be treated as trivial.

Most violent men who participate in reform programs stop physically harming their partners, a landmark British study has found, prompting the chief executive of an Australian male violence prevention association to call for an urgent update of similar programs here.

The five-year research project was run through the domestic violence organisation Respect. It examined programs attended by men voluntarily or through referral by a partner, court, or social services.

Women who reported having a weapon used against them dropped from 29% to zero, while those who said they were slapped, punched or had something thrown at them fell from 87% to 7%. Rodney Vlais, the chief executive of No to Violence, a Victorian organisation working with men to prevent domestic violence and abuse against family members, said the report was particularly relevant to Australia.

“The system in Australia has a lot of similarities to the way the programs work in the UK, and what this report shows is accredited domestic violence perpetrator programs can be successful, not only in reducing physical and sexual violence, but also in reducing other ways men limit their partners and ex-partners,” Vlais said.

“The research shows, of course, not all men change, and we have to be realistic and not look at these programs through rose-coloured glasses.

“But with the ultimate goal of safety of women and children, and giving them their lives back free from control and abuse, this research shows it is definitely worth investing in accredited programs,” he said.

Australia has no such accredited programs designed to prevent domestic violence. While Vlais said there were minimum standards for perpetrator rehabilitation programs in some Australian states and territories, these programs were rarely audited.

“In Victoria, the minimum standard guidelines for these programs are 10 years old, and while they’re a bit more updated in NSW, there is no active process for evaluating these programs in depth.

“These services hold promise, but evaluation every couple of years is critical because this is complex and tricky work. We must develop a national accreditation system here in Australia.”

The programs which were successful liaised with victims as well as police, courts and social services, so that information was shared if, for example, a man breached a no-contact order while taking part in the program.

Report author, Professor Nicole Westmarland from Durham University’s Centre for Research into Violence and Abuse, said: “Our data shows that most men are able to take steps towards positive change with the help of a domestic violence perpetrator programme and although there is more work to be done, we are quite optimistic about the ability of these programmes to play a role to prevent domestic violence.”

Report author, Professor Liz Kelly from Child and Woman Abuse Studies Unit at London Metropolitan University, commented: “One of our contributions is to explore change in a more rounded way, including for children. On virtually all of our measures and indicators movement was in a positive direction, and we found no evidence that men shift to more subtle forms of abuse.”

If you need help with domestic violence, separation and divorce or any aspect of family law, give our friendly, experienced team a call today. We offer a free, 10-minute phone consultation.