The Executors Commission- Your Conduct Counts. Re Estate of Badstuebner [2020] QSC 144 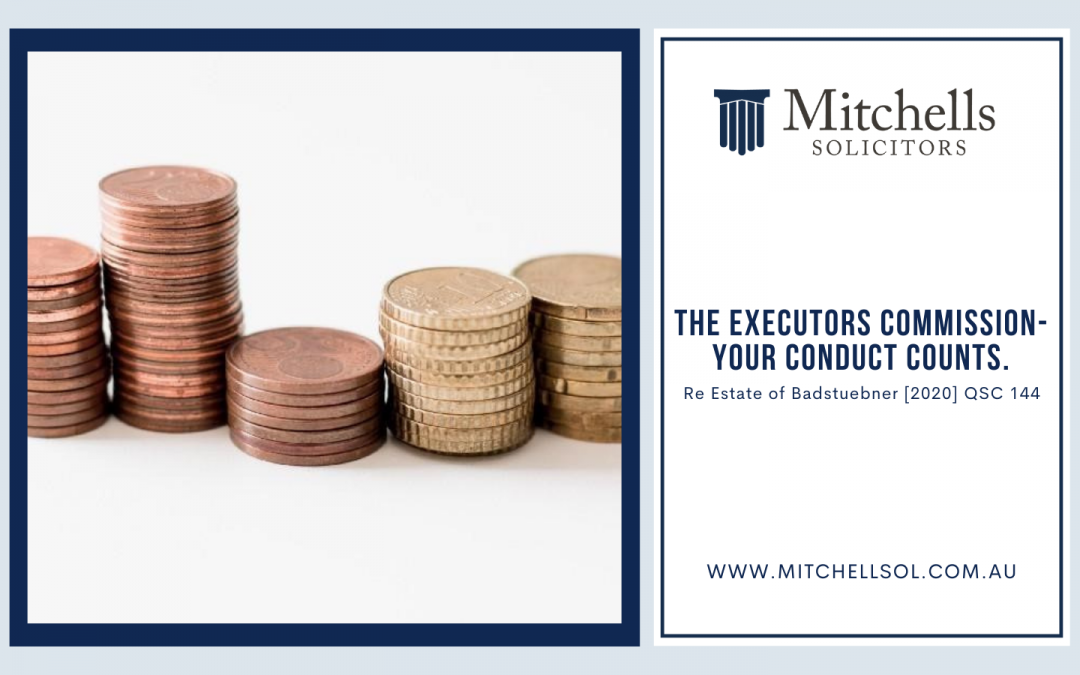 The Executors Commission- Your Conduct Counts.

Agreeing to become a named executor in a will is the easy bit. The hard bit comes when you’re called upon to make good those promises you made to oversee the distribution of an estate, which is going to take up the majority of your time and your patience.

Being an executor comes with a huge list of responsibilities that you may not have even considered; from locating the will and obtaining a grant of probate to calling in the assets of the estate and paying the deceased’s debts. You could even have to rehome the deceased’s pets and defend claims from unhappy friends and relatives who feel that they should have been included as beneficiaries in the will.

You get the picture-becoming an executor is a lot more responsibility than promising to feed your neighour’s goldfish when they go on holiday.

Which is why the court can pay you a commission for your ‘pains and troubles’ during the administration of the estate and in Queensland the court can award  an amount what they think is ‘fit in the circumstances’ as your commission, which can make all that hard work worthwhile and even if you’re a named beneficiary in the will the court can still order a commission payment to reimburse you for the extra work you’ve undertaken.

There is a pretty important caveat to entitlement of this commission though. No executor is automatically entitled to a payment and to earn it you have to prove that you have done the right thing in performing your duties. Unfortunately, the courts don’t always say yes.

Thomas Badstuebner ( Re Estate of Badstuebner [2020] QSC 144) is one of four siblings but was the only child named as the executor of his late father’s estate. The estate wasn’t complicated and each child was left an equal share but Thomas felt that he should receive an executor’s commission and applied to the court.

The problem was that Thomas hadn’t been a great executor and had used his status to gain an advantage over his siblings by making decisions that would allow him to receive ownership of his father’s property, car and household property.

Although Thomas was granted probate in June 2018, between then and November of that year, Thomas rented out his father’s property rather than place it up for sale and made no distribution of the estate whilst he tried to negotiate with his siblings. Even when the property was eventually sold, payment wasn’t made to Thomas’ siblings and seven months later $447,500 from the sale was still sitting in the estate’s account waiting for distribution.

Thomas’ siblings were wise to Thomas  and defended the application for commission on the basis that Thomas had purposely delayed the distribution of the estate to pressure them into agreeing that Thomas should be paid a commission and agree to his wishes.

As part of any application for commission to be made, the executor must outline the work or attendances that have been made during the course of the administration of the estate, which the executor believes warrants the commission. Executor’s commission is usually awarded on the percentage of the income and capital in the administration of the estate. It’s not a calculation of an hourly rate of the time that has been spent administering it. The amount of commission sought by Thomas in his application was $41,858.89, which was three per cent of the estate’s capital of $1,327,848.35 and five per cent of the estate’s income of $40,468.84.

In making a decision about awarding an executor’s commission the court may take into account the following factors:

(a) the value and composition of the estate; and

(b) the provisions of the will or trust instrument for the estate; and

(c )the conduct of all persons (including the parties) connected with the administration of the estate; and

(d) the nature, extent and value of work done by persons other than the trustee, including non-professional work delegated to a lawyer; and

(f) the efficiency of the administration of the estate; and

(g) any other matter the court considers relevant.

The court held in this case that Thomas had committed a breach of duty and that his actions had a detrimental impact on the efficiency of the administration of the estate. His claim for a commission was denied and the court refused to allow the costs of the application to come from the estate leaving Thomas responsible for the costs.

Thomas might not have intended to breach his duty of care as an executor but ultimately the responsibility of administering his fathers estate in an objective way coupled with an opportunity to gain an advantage over his siblings proved too much.

If you’ve been named as an executor in a will and feel that you might struggle with your obligations then there’s a number of things that you can do.

You don’t always have to agree to distribute the estate. There is no obligation to take the role and you can renounce your executorship as long as you haven’t already become involved in the management of the estate. If you do want to take on the responsibility of being an executor and receive commission for the work that you’ve done then when you’re asked to be an executor you could agree on the basis that a fee is included in the will to cover the your duties as an executor which would avoid the need to make an application to the court for an executors commission.

But the most important thing you can do is to seek legal advice from a solicitor who specialises in wills and estates concerning the steps that must be taken in order to record the time you’ve spent and the expenses you’ve incurred, in order that your hard work can be rewarded.