The Granny Flat Fail. Richardson v Lindsay and how it’s important to get your house in order before you commit. 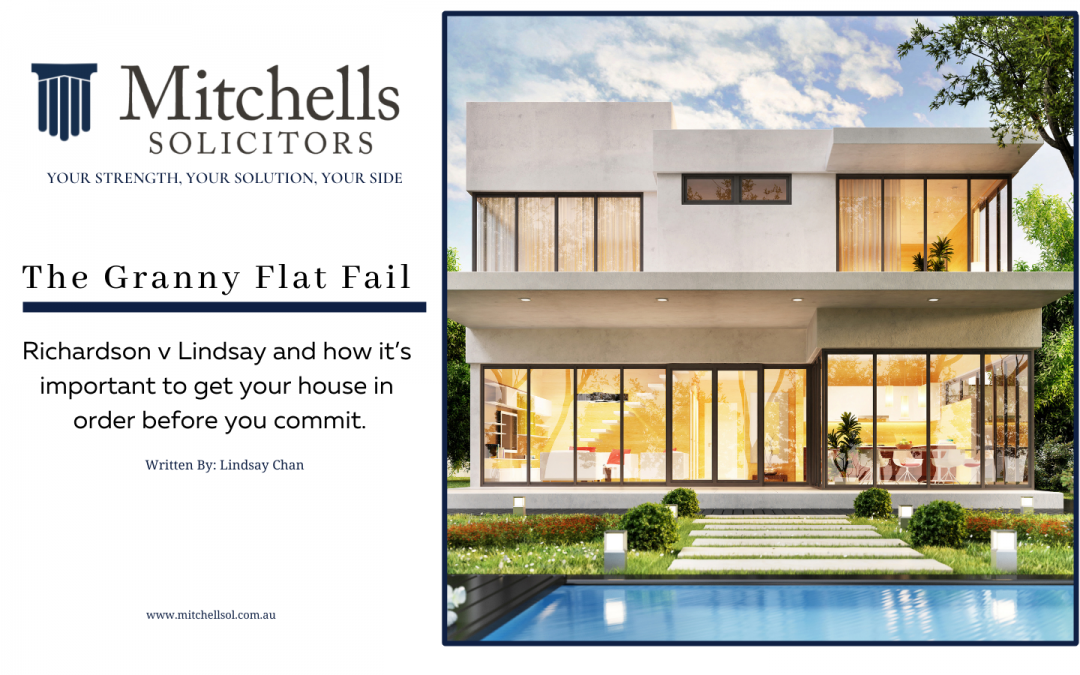 People are living longer. However, being the surviving spouse and living alone in the large family home, which was once bursting at the seams, can have a cost, both on your financial and mental health. But what if you’re also not ready yet to lose your independence and move into aged care?

Enter the Granny Flat Agreement. You sell that too big family home, which is way across town from your children and grandchildren and use the sale proceeds to purchase a larger home for your children or to build a separate house on their existing property, in exchange for them providing you with care.

What could possibly go wrong?

Well actually a lot, especially when those agreements are informal, or when your other children aren’t aware that the proceeds from the family home are no longer part of your estate and one sibling has benefited far more than the others.

Or, as in the case of Richardson v Lindsay [2019] NSWCA 148, one party might just simply change their mind.

Faith Richardson had four daughters and when her husband died in 2010 she sold her property and moved in with one of her daughters, Fiona, who was renting a property with her husband and her three children. A year later, Fiona and her husband bought a property in Orange for $470,000, of which Faith contributed $220,000.

A Family deed of arrangement was drafted which stated the following:

Faith will advance to the Carers by way of conditional gift the sum of $220,000.00 to assist them in the purchase of 13 Bill Marshall Drive, Orange NSW 2800 for the sum of $470,000.00 or some other suitable accommodation for Faith, the Carers and their family.

Things went well until 2014 when John and Fiona told Faith that they wanted to sell the house in Orange and move 25KM’s away to Lewis Ponds. They took Faith to see the property on three occasions, took her to meet the property sellers and had a conversation with Faith in which they made sure that Faith understood that if they bought the property they would not be able to repay Faith her $220,000. Faith made no objections to the purchase of the property and said she understood the financials so in March 2015 the Lindsay family and Faith moved to Lewis Ponds and in June 2015 Faith moved out, assisted by two of her other daughters.

Faith did not like Lewis Ponds. She felt isolated and complained there were no shops, medical facilities or public transport available and asked the Lindsay family for the return of her “conditional gift” on the basis that Fiona and John had, without her consent, moved to accommodation that was not suitable for her needs and brought proceedings claiming the benefit of a charge over the Lewis Ponds property to secure her contributions to the purchase totalling $220,000 together with their alleged increased value by reason of their investment in the Orange property. Alternatively, she claimed damages for breach of the Deed by reason of Fiona and John’s move to a property that was unsuitable for her needs – money that Fiona and John didn’t have because of the move to Lewis Ponds, which they believed had been sanctioned by Faith.

The decision of the Judge, which was upheld on appeal, found that Faith’s actions were a significant motivating factor in the Lindsay family’s decision to move and that they had suffered detriment in relaying on Faith’s representations in buying the Lewis Ponds property and taking on an increased mortgage liability. It would be unconscionable for Faith to resile from the expectation that she created in Fiona and John that she consented to the move, that she was therefore estopped from objecting to the move and judgment was entered for Fiona and John.

There are no real winners in this case. Faith was left without a home and the proceeds of the sale of her property and left with a warring family and a depleted bank balance from the legal costs spent. Don’t forget the rest of the siblings who now, through no fault of their own, will receive less than their sibling when their mother dies and still have to find somewhere for Faith to live and someone to care for her.

That’s not to say that Granny Flats are always a fail. And it should be noted that Granny Flat arrangements are not really all the same. Richardson v Lindsay describes one of many possible arrangements. If you’re willing to make a plan and document what will happen if things turn sour or when the parent needs money to go into an aged care facility, and you seek legal advice from a specialist in wills and estates then you just might find that a Granny Flat is the ideal solution to living a longer life.