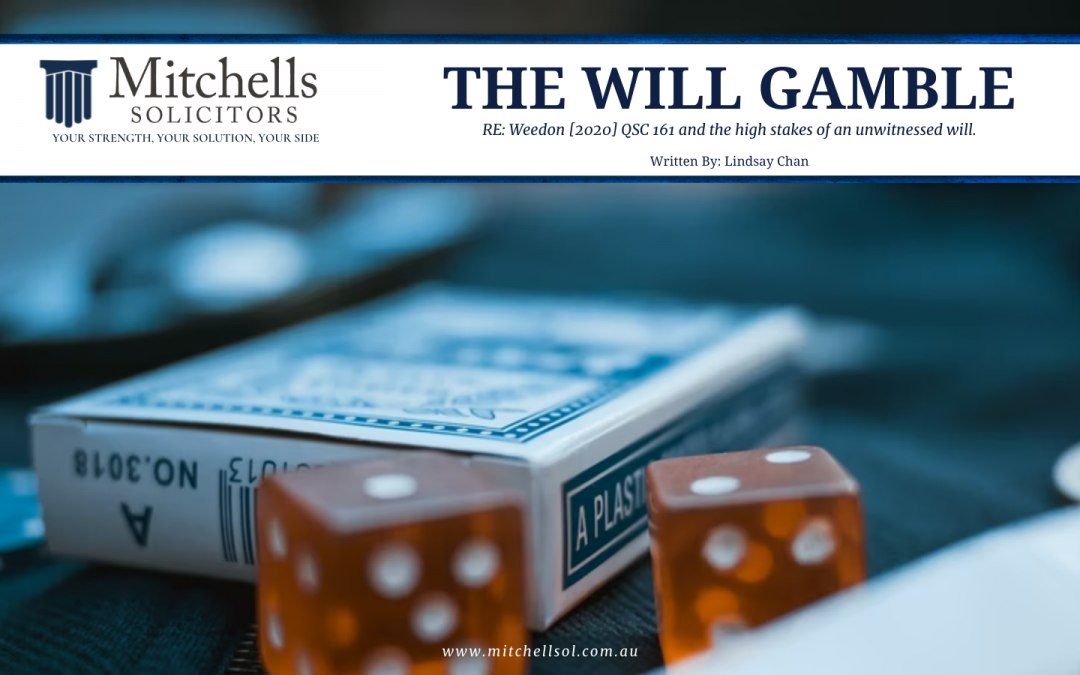 How much do you like to gamble? Not at all? A yearly bet on the Melbourne Cup? I would bet (pardon the pun) that you wouldn’t risk losing your entire estate to the wrong person by leaving it up to chance, yet that’s what people do each time they fail to properly prepare and execute a will.

Barry Weedon [Re Weedon 2020] thought that he had had lowered his risk considerably by preparing a document on the 19th April 2013 which was headed ‘my last will’ and which contained firm instructions about what was to happen to his estate when he died:

Barry’s niece, Miranda, was to receive a substantial amount of his estate and her husband, Derek, was named as the executor and trustee. Miranda and her husband had a close relationship with Barry and had taken over a caring role as Barry’s health had deteriorated.

Barry’s two estranged daughters were left a nominal amount of $2 each with Barry making it clear that his daughters had not engaged with him for many years despite his efforts following an acrimonious divorce.

Barry’s brother was to receive family photographs and historical documents and instructions were given about specific funeral arrangements.

The will was signed, dated and witnessed by a Justice of the Peace before being placed in his filing cabinet gathering dust until it was found on his death in November 2019.

Unbeknownst to Barry he’d increased his risks massively by failing to get legal advice from a professional. His homemade document hadn’t been signed in the presence of two witnesses, making it an informal will which would need the courts approval under section 18 of the Succession Act 1981 (Qld) to formalise the document as Barry’s Will.

At this point Barry is already not really winning. If the courts decide that his document isn’t a will then Barry will have died intestate and his entire estate will pass equally to his two estranged daughters, who refuse to have a relationship with him, rather than his niece, who he wanted to reward for her love and care. If the courts decide that his document can be formalised to be a will then the court costs of the application will dramatically reduce the estate, so his niece will only receive a portion of what Barry intended, all because he didn’t seek legal advice.

Under Sec 18 of the Succession Act, the courts will consider whether the deceased intended the document to be his last will. There were no other documents found and Barry had left clear indications that the document was intended to be his will and provided clear intentions of what should happen to his estate. There was also no suggestion that Barry lacked testamentary capacity at the time of the will and the Judge confirmed that in normal circumstances he would have granted the application. However, the Judge had noted that Barry’s daughters hadn’t been made aware of the application being made and given that they stood to lose the estate which would pass to them on intestacy and instead gain $2 based on the Judge’s decision, they should be.

The case was adjourned with directions for steps taken to locate the deceased’s daughters, and, if the daughters were located; steps taken to notify them of the application and their right to attend and be heard at 9.15 am, 29 April 2020.

Barry’s luck could still go either way. His daughters were now going to be given the opportunity to oppose the application and ask the court for Barry to be declared intestate, incurring more costs to be deducted from the estate and leaving his niece with nothing.

By the 29th April, both daughters had been traced and informed of the application. One indicated through her solicitor that she did not want to participate in the application and the other, although she’d received the notification, failed to respond.

Thanks to his daughters, the courts were able to allow the application for the document to be formalised to a will and Barry’s intentions as to his estate were finally fulfilled albeit with a hefty deduction for legal costs associated with the application. But had the daughters opposed the outcome then the only possible winners could have been the daughters if they traded their $2 for a much bigger piece of the estate.

The worst kind of risk takers are those like Barry who take risks when they don’t have to, with only a downside and no possible upside. Just one phone call to a solicitor who specialises in wills and estates could have made Barry’s estate risk free and ensured that the right people benefitted from Barry’s estate. Don’t leave it up to chance and gamble on your will.  Your loved ones deserve better.