We Need To Talk About Wills. Birch v Birch and the fight for Fairyland 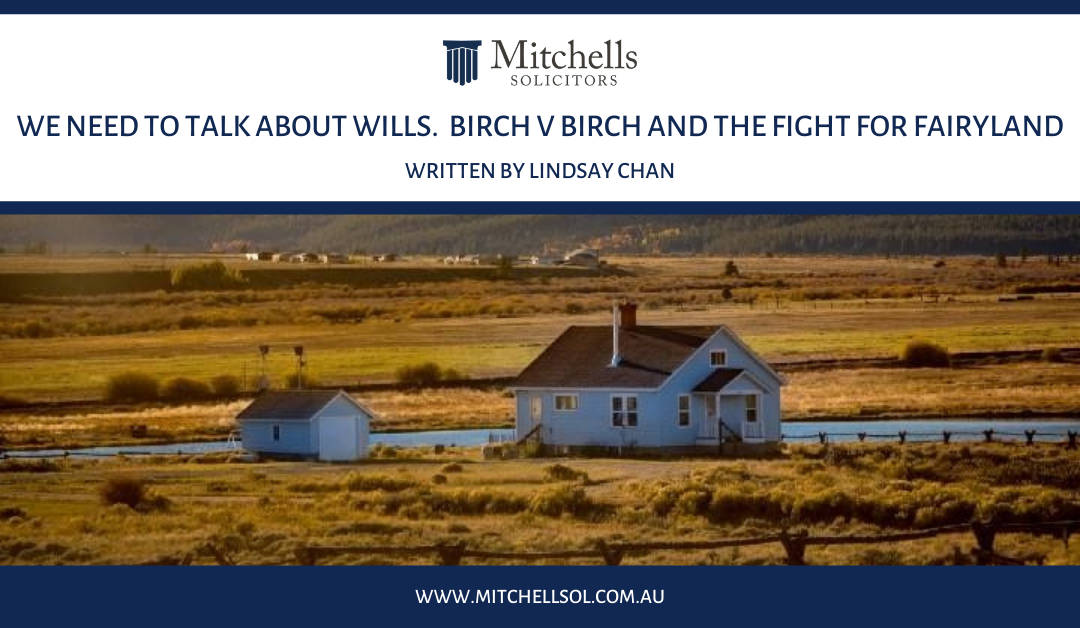 We Need To Talk About Will. Birch v Birch and the fight for Fairyland.

There are things that people don’t like to talk about. In an age where we constantly  overshare and our personal lives are uploaded to social media for even strangers to see, talking about money in families is one of the few remaining elephants in the room.

What happens to your estate is seen mostly as a private affair, only to be disclosed by a nominated third party following your death. Talking about your estate is considered morbid and even to be bad luck, the grim reaper waiting in the wings ready to swoop if you should ever dare to mention the plans you have in place after  your death out loud to your children.

We need to talk about wills. You might avoid an awkward few hours around the family dinner table, but the aftershocks of a will that you’ve failed to discuss with your children can lead to family disputes, claims that people have influenced your decisions, the contents of your will that you tried to keep so private could feature in open court documents and your estate could be diminished drastically from paying the  legal fees involved in solving the disputes.

And if you still think that silence is golden when it comes to discussing your will then let me tell you about the Birch family.

Mr and Mrs Birch made joint wills in 2004, giving a life interest to each other in the family farm, Fairyland, and the remainder to one of their six children Douglas, subject to him paying his five siblings $15,000 each. Douglas had worked on Fairyland for many years and lived with his wife, Juanita in a cottage on the farm. In late 2004, Mr & Mrs Birch bought a new property with Douglas and Juanita with their shares being reflective of their respective contributions to the purchase price. In 2008, they all established a new Trust for their primary production business (which largely held machinery and livestock) and the senior Birches transferred a 1/3rd interest in Fairyland to Douglas as a gift, resulting in them each owning a 1/3rd interest in the farm.

New wills were made, again leaving each other a life interest and the remainder to Douglas, although this will specified that Douglass should pay each of his 5 siblings 6.66% of the main farm value. In order to explain their decision, handwritten letters to the children were placed with the will.

In 2009 Betty Birch executed an enduring power of attorney in favour of her husband and Douglas. Mr Birch Snr died in 2011, and Betty went to a solicitor and transferred her 1/3rd share in Fairyland to Douglas as a gift so Douglas now owned 2/3rd share of the farm. The solicitor was engaged by Betty and  he signed for the son as the transferee on the transfer.  In 2012 Betty wrote another will. She no longer had a share in the farm as this had been gifted to Douglas, but she wrote another letter to accompany the will explaining again her and her husband’s wishes that Douglas should receive the farm.

In 2012 Betty moved into a care home and shortly after two of Betty’s other sons sought legal advice on the transfer of Betty’s share of the farm to Douglas. As Douglas was Betty’s attorney under the 2009 power of attorney Betty executed, arguments were raised by the other siblings as to whether Betty had been influenced by Douglas to transfer her shares in the farm to him and whether Betty fully understood how the gift to Douglas would affect the other siblings inheritance.

Under the Powers of Attorney Act 1998 (Qld), there is a presumption of undue influence where there is a transaction between an attorney and the principal the attorney is appointed to act for.

In September 2013, Betty’s two other sons applied to the court to set aside the property transfer of Fairyland to Douglas on the basis of undue influence, conflict of interest and unconscionability. However, the Queensland Supreme Court decided Betty did understand her actions, that she was unduly influenced,  as she was properly advised by a lawyer, and upheld the transfer to Douglas. The Court noted that the action of the solicitor signing on behalf of Douglas as transferee was not enough to “affect the transaction such as to justify setting it aside” and that it was significant that Douglas also received legal advice separate to Betty.

In 2019, the siblings on behalf of their mother under the enduring power of attorney appealed the Supreme Court’s decision on the basis that the advice given to Betty by her solicitor was seriously deficient, she hadn’t been given legal advice independent of Douglas, had not been given financial advice and so didn’t understand the consequences of her actions, and the Judge had been incorrect in concluding that the presumption of undue influence under the Powers of Attorney Act ( 1998) had been rebutted.

The Court of Appeal in Queensland unanimously dismissed the appeal with costs stating that the trial Judge was correct to find that the presumption of undue influence was rebutted saying;

On the evidence which the trial judge accepted, it was demonstrated that Betty decided to make this gift, uninfluenced by her relationship with Doug as principal and attorney. She made this decision because she wished to avoid the risk that, if the interest was to pass to Doug under her will, that could be challenged by the actions of some of her other children. If she had a concern about Doug being able to borrow enough money to pay out his siblings, for what had been his father’s one third interest, that was a proper and rational concern. If there had been some challenge to the distribution of her estate, according to her will, that would have had no potential relevance for Doug’s prospects of borrowing something of the order of $1 million to pay for what had been his father’s share. For many years, she and Jim had meant to leave the whole of Fairyland Doug, and they had made mutual wills to that effect. As I have discussed, this was not an improvident transaction when all the circumstances are considered.

Unfortunately, this still isn’t the end of a highly emotional and traumatic time for the Birch family as Geoffrey Douglas, as Betty’s attorney, has applied for special leave for the case to be heard by the High Court. Betty Birch tried to explain her decisions in letters accompanying her will but this hasn’t avoided costly and lengthy legal proceedings leading to mistrust and accusations between siblings.

What should Betty have done differently?

She should have sought specialist advice about Fairyland as a family business. If the Birch’s had put agreements in place at the start of their partnership with Douglas and his wife and shared those agreements with the other siblings, then any disputes could have been minimised.

The transfer of Betty’s share in Fairyland to Douglas could have been easier digested by the other siblings if records had been kept of Douglas’ contribution to the farm. How many hours he’d worked, how much he’d been paid for that work and the financial contributions he’d made to Fairyland.

The  present situation could have been avoided if Betty had been completely transparent with her children about her intentions for the family business, whilst she was capable of doing so. If Betty had set out her intentions face to face and not in letters accompanying her will with an explanation of the work Douglas had done on the farm, her estate would have remained intact, as would her family.

So start talking about your will with your family. Explain your reasons for your decisions, speak to your children about the family business and whether they want to be involved in it after your death, but most importantly take the sting out of any surprises that may leave them suspicious of their siblings and incur legal costs.