Who Decides Your Resting Place? Accom v Pickering and the battle for burial rights. 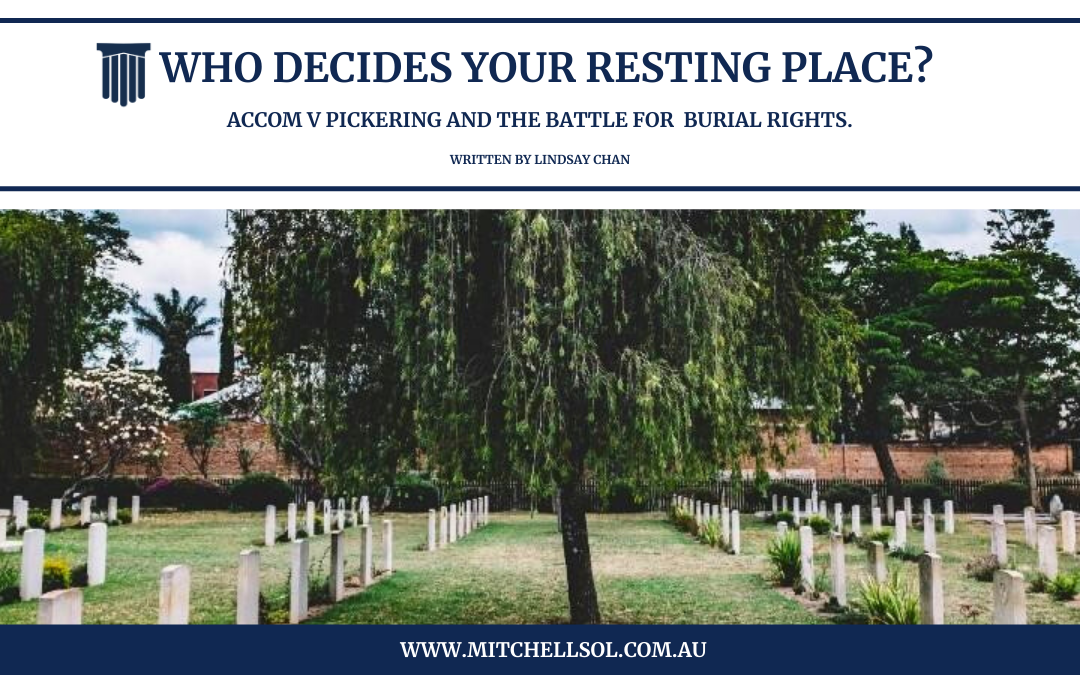 The term ‘Country’ is particularly important for Aboriginal peoples. It signifies a deep connection between a person and the land of their ancestors. Ian Hamm, a Yorta Yorta man, described to the Victoria Law Commission the importance of being buried on Country which is believed to help you rest easier.

“[Being buried on country is] about who we are as a people and our attachment to our country, particularly our tribal country. Many of us in the urban environment of south-east Australia don’t live on country. We have to move for work and for other reasons, and we are dispersed through history; so our return to our dreamtime, our place of our dreaming, of our ancestors, after we pass, is an intrinsic part of who we are and who we will always be.”

With such clear instructions about where someone should be buried you would think that disputes would be few, and yet half the burial disputes that have been settled by the Australian courts have involved Aboriginal deceased.

Although everyone would like their relatives to be buried on country, different family members have very definite different ideas about where that specific country is, leading to community discord, ripping families apart and in the case of Accom v Pickering leaving the deceased’s mother afraid for her safety.

When the deceased parents are from two different traditional owner groups, which ancestral land is the right one?

The case of Williams v Williams in 1882 clarified that there’s no form of property in dead body. Possession lies with the person who has the duty to make arrangements for disposal of the body, a named executor in the will.

Anne Creegan, special counsel who conducts will clinics in Aboriginal communities noted that many more Aboriginal people are choosing to make a will appointing an executor who will be responsible for decisions involving the burial because they have witnessed firsthand the destructive family arguments that take place following a death in the community.

There are still too many though who do not have a will or, like the deceased in Accom v Pickering, die suddenly at an age where death is a lifetime away. So what happens then?

Walter, the deceased in Accom v Pickering [2020] died at just 28 and his mother and his aunt disagreed about where he should be buried. So much so that mediation had failed and the Applicant Mother had been assaulted by members of the Defendant Aunt’s family. Two months after Walter’s death, a decision which should have been made privately was played out in the public arena of the Supreme Court of Queensland.

Walter was born in Mareeba to Jennifer Accom and Clancy Baker. Jennifer’s family came from Woorabinda and Lockhart River whilst Clancy’s were from Croydon & Mareeba. Both parents still reside in Mareeba. In Aboriginal culture, the first born son is deemed to be a significant member of the larger family group and it’s common for grandparents to take on the care of the grandson, usually with the agreement of the parents.

There was no such agreement for the grandparents to take on the care of Walter, however when he was two the applicant came home and found her son  had been taken to live in Croydon with his paternal grandparents and raised as part of the Tagalaka tribe. They died when he was around seven and Walter moved back to Mareeba and lived with his paternal great aunt. Jennifer continued to have a relationship with her son and visited him regularly. There were times when he lived with Jennifer and went on holiday with her and her family but he also lived with other paternal family members.

At 16 he returned to Croydon and lived with his paternal aunt, eventually becoming a rodeo commentator and travelling the state until his untimely death.

Rule 610 of the Uniform Civil Procedure Rules details the order of priority of people who the court may grant letters of administration to when someone dies without a will. The deceased had no spouse, children or grandchildren and so under this rule Walter’s parents, Jennifer and Clancy, had priority. However, this isn’t an absolute rule and 610 (3) gives the courts discretion to depart from the order of priority.

In the absence of any intention from the deceased, the court looked at Walter’s cultural connections in accordance with Jones v Dodd . There’s no doubt that Walter had strong connections to Croydon and the Tagalaka tribe but the common ground between both his parents’ families is Mareeba.

Practical considerations were also considered by the court. Because of the distance between the two proposed funeral sites there would be people who could only attend the burial at one location and not the other. Mareeba was deemed logistically less demanding as a destination for people to travel to.

Whilst there was no issue as to the costs of each proposed burials as each party had agreed to pay the costs of the burial, Jennifer’s safety whilst attending a burial in Mareeba was also taken into consideration.

Judge Henry J ruled that although Croydon has been his home for significant parts of his life, Walter’s cultural connection to the land was not so exclusive or compelling to trump the mix of other practical considerations and the common law starting point trending in a burial at Mareeba:

It may well be that the deceased wanted to be buried at Croydon but his intentions were never shared, leaving each tribe to believe strongly that they knew where Walter should be buried. Observing cultural connections is a welcome addition to the consideration of the court, but when those connections are not singular then the only option is to weigh heavily in favour of more practical considerations when making a decision.

You might not have ties to particular tribes or land like Walter did but you may want to return to a particular place to rest. In the absence of a will and with no clear intention from the deceased, the courts will always apply practical considerations to solve the dispute which might not be the burial you would like. But by making a will naming an executor to deal with your burial and by providing clear instructions, you can always rest easy.