The Charity Ambiguity Trap & How To Avoid It. Banwell v Attorney-General [2020] QSC 239 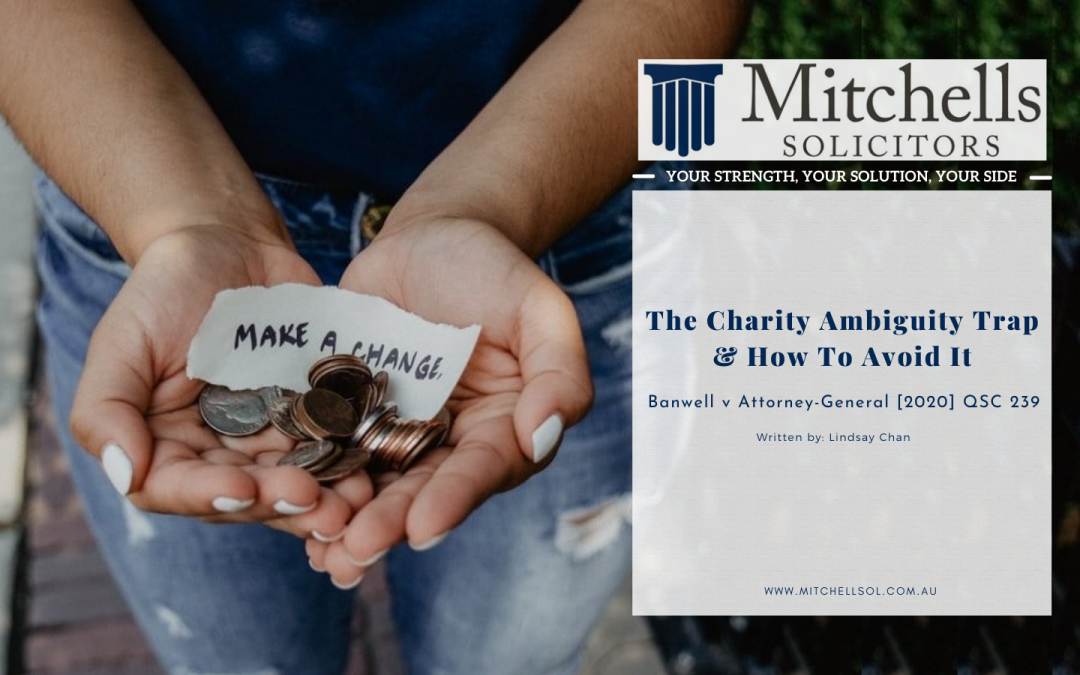 The Charity Ambiguity Trap & How To Avoid It

There’s no better way for your estate to make a difference then to leave a gift in your will to charity. Charities will always be the most grateful of beneficiaries no matter how big or small your gift is and there’s an enormous sense of wellbeing to be had, knowing that your estate is working hard to help others after you’ve gone.

At first glance, leaving a gift to charity looks straightforward. You decide on the charity or charities  that you would like  to benefit from your estate and whether you want to leave a specific monetary amount, a percentage of your whole estate or even a family heirloom to be auctioned and then insert those details into your will.

So why do so many gifts to charities fail?

Because of the ambiguity trap. Charities are complex entities for many reasons. They change names, can be registered in different names to the ones that they are publicly known by, and can even cease to exist by the time your will is read. Numerous gifts to charities have failed because a will hasn’t correctly identified the charity or specified the purpose of the gift when the charity delivers both charitable and non-charitable work.

There’s numerous case law detailing just how easy it is for things to go wrong when it comes to leaving a gift to charity and the most recent case, which is also arguably the best example of the ambiguity trap is Banwell v Attorney General [2020]

Marie Cruice wrote her will in 2012 and left $450,000 on trust equally between 8 named or described charities, but when Marie died in 2015 it was clear that she had fallen into the ambiguity trap. Some of the charities names were not in existence at the date of her death and others had changed their names, some before the will was signed.

The Princes Alexandra Hospital was not a legal entity in its own right but was part of the Metro South Hospital and Health Service and there were nine presently registered entities with names including “National Heart Foundation” so how could the administrators even begin to understand which of these entities were the intended recipient of the estate.

It was clear that the administrators of the will were unable to distribute the estate in accordance with Marie’s wishes and applied to the court for guidance.

The lapse rule makes it clear that gifts to an entity that no longer exists at the time of death will lapse. However, there are exceptions to this rule and a gift will avoid lapsing where it is clear that:

Each one of Marie’s gifts were considered in turn and the court concluded that the purpose of the gifts could still be fulfilled and were able to be distributed.

The gift to the Princes Alexandra Hospital was given to the Metro South Hospital & Health Service for  the benefit of the Princess Alexandra Hospital’s fund for research purposes and the gift to the National Heart Foundation was given to the National Heart Foundation of Australia ABN 98 008 419 761, to be applied for research in this foundation.

When it comes to gifts to charities, the wording really is everything and those small amendments made by the court meant that all the charities named could benefit from Marie’s generosity.

Unfortunately for the administrators of the will and the other beneficiaries, those small amendments took five years from Marie’s death to come into fruition and the estate also took a big hit from costs.

So how do you avoid the ambiguity trap when it comes to leaving your gift to charity? Well charities themselves have lowered the risk of a potential lack of gift for themselves by putting details of their registered charity name and details along with potential clauses you can use, but that’s still no substitution for the expert of advice of a solicitor who specialises in wills and estates, who can draft your will and ensure that all intended recipients benefit exactly how you wanted them to, without falling foul of the charity ambiguity trap.