Friends Who Become Family. Rakovich v Marszalek [2020] NSWSC 589-Why good friends should make a will. 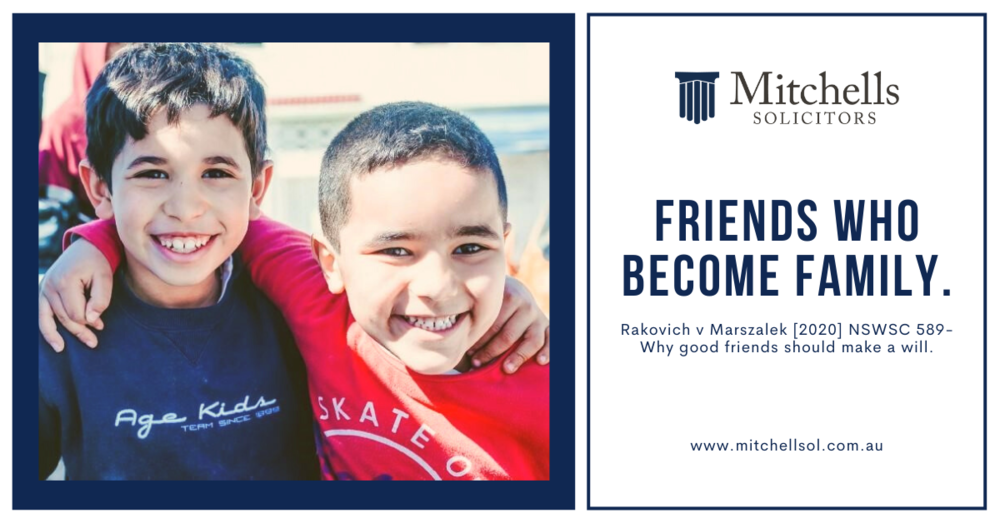 Rakovich v Marszalek [2020] NSWSC 589-Why good friends should make a will.

There’s a well known quote that says “ There are friends, there is family, and there are friends that become family.” For Horst Marszalek this could not have been truer.

Horst was a longtime bachelor, had no children and his closest relatives were two nieces and two nephews, who he had never met. What he did have was a friend and confidant, who he had known for the last 30 years, Mr George Rakovich.

George was a divorcee, who was living with Horst at the time of his death. George considered Horst to be his stepfather and had, for years, relied upon Horst for everything, from providing him with a place to live, to supporting him through his divorce. In turn George supported Horst, especially towards the end of his life, when Horst was suffering with a decline in his mental health.

In this mutually supportive relationship, George was Horst’s family.

In 2018 Horst died leaving George not only alone but without a home. Horst died without making a will,  which meant his estate including the home George lived in would pass to those distant nieces and nephews he’d never even met under the intestacy rules.

George brought a claim under s50(1) of the Succession Act 2006 (NSW) for an entitlement to Horst’s estate and claimed that he was ‘an eligible person’ in that he was a person who was, at any particular time, wholly or partly dependent on the individual who passed away, and who was, at that particular time, or at any other time, a member of the household of which the deceased person was a member.

A friend who had become family.

It was clear to the court that the fact that George had lived with Horst and relied on him for housing, emotional care and financial support, that George was a member of Horst’s household and that he had lived in a close personal relationship with Horst at the time of his death and for 30 years before. George was therefore an eligible person to bring a claim under New South Wales law (but he would not have been so lucky under Queensland law).

A more difficult decision was how to establish just how much money George should be given from the estate and so the court, who were far more used to dealing with left behind family members and warring siblings, considered the following when making their decision:

Horst’s nieces and nephews filed evidence which showed that Horst’s relationship with his family wasn’t close. Horst had emigrated to Australia in the 1960’s and had not returned to visit his family in Germany, not even for a holiday. There was the odd phone call at milestone birthdays, but there were no regular family dinners or holidays spent together and Horst had never met the beneficiaries who would receive his estate under the intestacy rules.

George was the one who Horst had spent his family dinners and holidays with, and the court saw evidence of cards that had passed between them as well as other witness evidence to collaborate George’s account of their friendship. It was argued during the case that although Horst had a moral duty to his nieces and nephews who all had modest means, he had a stronger moral duty to provide for George.

The court ruled that George was given 45% of Horsts estate with the other 55% being distributed between Horsts surviving family members.

Horst had been George’s family for over 30 years but then let him down at a time when he was vulnerable. Horst had the right, as we all do, to leave his estate to whoever he wanted, but if you die without making a will then your estate will always be distributed between your closest biological family even if that wasn’t your intention and they live on another continent.

So if you have friends who have become family then do the right thing and make a will which lets your family know you care enough to look after them when you die as much as you do now.