Is A Text Message a Valid Will? 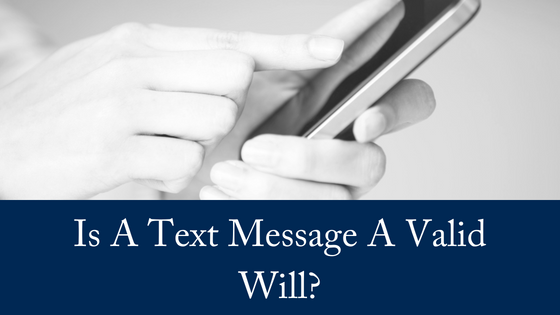 Is a text message a valid will? The answer is: it depends. Some jurisdictions will accept a text message as a will, while others won’t. But the true moral of these stories is that your estate planning should always be more thorough than a text message.

In France, a man going through a divorce reportedly sent a text to his sister saying that he wanted their mom to inherit part of his estate instead of his wife. But when he later died by suicide, the family’s solicitor didn’t include the text message as part of the final will—a decision recently reaffirmed in a court of law.

According to the BBC, the mother brought the case to court, arguing that her son’s text should be considered binding. A court in northeast France ruled that according to the country’s law “a will can only be valid if it has been written by hand, dated and signed” because it “minimises the risk of forgery and mistakes,” the BBC reports.

The rules are not as rigid in other parts of the world: Australia, Canada, South Africa, and some U.S. states have more relaxed laws that give courts the power to approve informal records as part of someone’s will, and the UK is also exploring a similar reform to the laws around what is recognized as a will. But like the French man’s ruling, text messages aren’t always recognized as valid last wills. In 2014, a man in Sweden sent text messages to his family and friends describing what they would inherit from his estate hours before he died by suicide. While a district court in Sweden recognized the texts as valid, an appeals court overturned that verdict. Private law professor Margatreta Brattström said that the Swedish man’s final wishes would have been recognized by the court if he had physically written them down.

“Making a will and passing on your possessions after you’ve died should be straight-forward,” Professor Nick Hopkins, Law Commissioner of England and Wales said. “But the law is unclear, outdated and could even be putting people off altogether. Even when it’s obvious what someone wanted, if they haven’t followed the strict rules, courts can’t act on it.”

Queensland Court Rules Text Message Is A Valid Will

An unsent text message with the words “my will” and a smiley face was a valid will cutting out a dead man’s wife and son, a court has ruled.

The family feud over the status of the text played out in the Queensland Supreme Court as the man’s brother and nephew asked for the message to be treated as his final will.

The 55-year-old man took his own life and the unsent text message was found on his phone the following day.

He wrote that his brother and nephew should “keep all that I have house and superannuation, put my ashes in the back garden”. He said his wife should “take her stuff only she’s … gone back to her ex AGAIN I’m beaten”.

The man gave his bank details before signing off “my will” with a smiley face.

The man’s widow, supported by his son from a previous relationship, argued the text message should not be treated as his final will.

In her judgement, Justice Susan Brown said the woman “particularly attaches significance to the fact that the deceased did not send the text message”.

This, she argued, was “consistent with the deceased not having made up his mind”.

Justice Brown said it was “uncontroversial” that the relationship between the couple, who had been married for a year and in a relationship for three years and seven months, “had problems” and the wife had left on at least three occasions.

“It should be said, notwithstanding that the applicant had moved out, she still made arrangements to take the deceased to his mental health appointments and that they spent the weekend prior to his death together, cleaning garden clippings and boxing books for Lifeline,” the judge said.

While it was not necessary to make a finding on this point, Justice Brown also said the evidence before her did not establish that the woman had returned to her ex-husband or had any relationship with him “other than one of friendship”.

She said “the informal nature of the text” did not exclude it from being treated as representing the man’s intentions and noted a 2013 Queensland case in which a DVD marked with “my will” was found to constitute a valid will.

Justice Brown took into account a range of factors in ruling the text message was a valid will, including that it was “created on or about the time that the deceased was contemplating death, such that he even indicated where he wanted his ashes to be placed”.

The judge added this ruling would not stop the man’s wife and son making an application under family provision laws for a share of his estate, which included a house and superannuation account.

The courts in recent years have grappled with unusual cases involving informal wills. In 2015, the NSW Supreme Court ruled a video will was valid and displaced a written will made just two days earlier.

Justice Geoff Lindsay said at the time that he understood “the court had never before admitted a video will to probate”.

Estate planning should be considered more thoughtfully, to avoid the time and costs of requiring a court to declare an informal will valid. Always seek specialist advice when establishing your estate planning, and remember to update your will every three to five years. For expert advice, contact us today. We offer a FREE, 10-minute phone consultation.