Who Decides To Withdraw End of Life Care? 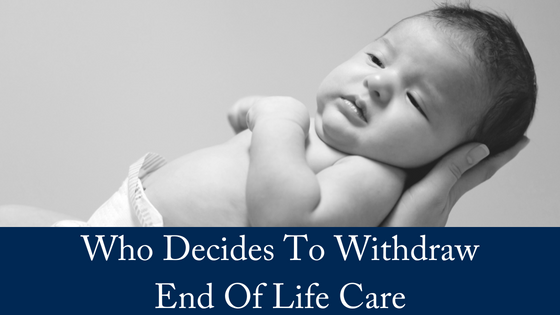 Alfie was born to parents Tom Evans and Kate James, from Bootle in Merseyside, on 9 May 2016.

He was first admitted to Alder Hey Children’s Hospital in Liverpool in December 2016 after suffering seizures. Doctors diagnosed a degenerative neurological condition, which they have not been able to identify definitively.

Alfie’s parents and the hospital clashed over what should happen to Alfie, who had been in a semi-vegetative state for more than a year.

His parents said they wanted to fly him to a hospital in Italy but this was blocked by Alder Hey, which said continuing treatment was “not in Alfie’s best interests”.

The Alder Hey Children’s Hospital NHS Foundation Trust went to the High Court to seek a declaration that “continued ventilator support is not in Alfie’s best interests and in the circumstances it is not lawful that such treatment continue”.

Sitting at the High Court in Liverpool, Mr Justice Hayden began overseeing the case on 19 December.

Alder Hey said scans showed “catastrophic degradation of his brain tissue” and that further treatment was not only “futile” but also “unkind and inhumane”.

But his parents disagreed and wanted permission to fly him to the Bambino Gesu Hospital in Rome in the hope of prolonging his life.

The key to understanding the case is one very simple but far-reaching principle of English law. Once a dispute comes before a court over the care of a child, the Children Act 1989 provides that the welfare of the child is the paramount consideration.

In ordinary family disputes it means that when considering where a child should live following a divorce, for example, fairness towards the parents is, in itself, irrelevant. The only question for the judge is “Where do this child’s best interests lie?” In ‘end of life’ cases such as Alfie’s—or the similarly tragic case of Charlie Gard, which came before the court last year—exactly the same principle applies. Very often, of course, parents and doctors will agree, even though the answer is frequently unclear. Parents usually agree to be guided by medical advice and expertise, and doctors are prepared to be flexible and to accommodate the views of parents as far as they can.

When doctors and parents cannot agree, unless parents are given carte blanche to do anything they like, someone must decide. In accordance with the stipulations of the 1989 Act, the role of the Judge is:

… to take over the parents’ duty to give or withhold consent in the best interests of the child. It is the role and duty of the court to do so and to exercise its own independent and objective judgment. [See eg: Kings College Hospital NHS Trust v. Thomas and Haastrup [2018] EWHC 127 (Fam)]

Sometimes the best possible medical treatment is palliative, with the aim of simply alleviating pain and discomfort. Patients who are able to make their views known can, and often do, tell their doctors to desist from life-saving treatment. Children too young or too sick to voice a wish do not have that option.

Who, then, should speak for the child? The parents will almost always be the child’s strongest advocate, (although the law also provides for the appointment of a ‘guardian,’ an independent voice in court to argue for what he or she perceives to be the child’s interests). But, just as parents can sometimes be wrong in demanding that treatments (such as blood transfusions) be withheld, so they can also sometimes be wrong in demanding that futile treatment be continued.

At issue in Alfie’s case was the question of whether his best interests were served by continuing with life-sustaining treatment, including the provision of artificial ventilation and feeding by means of a tube into the small intestine, or by withdrawing it and providing only palliative care.

End of Life Care in Queensland

Health care includes withholding or withdrawing life-sustaining treatment if commencing or continuing the treatment would be inconsistent with good medical practice (i.e. medical and ethical standards, and practice and procedures of the medical profession in Australia).

In Queensland if a substitute decision-maker has made a decision to withhold or withdraw life-sustaining treatment, the decision will only be followed by a health professional if he or she believes that commencing or continuing the treatment would not be good medical practice. This means that if the health professional believes the life-sustaining treatment should continue because it is good clinical practice, then the substitute decision-maker’s decision to withhold or withdraw the treatment will be overruled.

In Queensland it is offence for a health professional to carry out health care (including withholding and withdrawing life-sustaining treatment) on a person with impaired capacity unless:

This results in an unusual legal position in Queensland in relation to futile treatment.

If you have questions about end of life care, advance health directives, enduring powers of attorney or any other estate planning question, contact our experienced team today. We offer a FREE, 10-minute phone consultation.