Should You Buy a Flood Prone House? 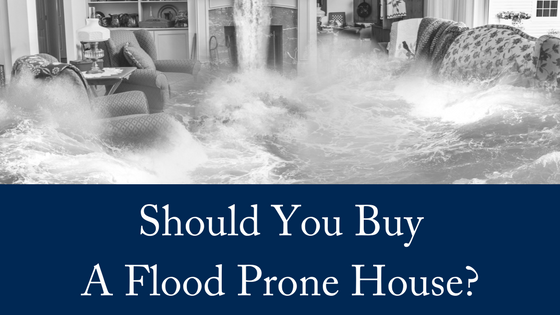 When businessman Paul Edwards and his wife Hazel bought what they thought was their dream home, they were assured by the sellers that it had never flooded. What they didn’t realise was that they had just bought a flood prone house.

Less than a year after moving in, they awoke to discover a heavy downpour had transformed their garden into a lake. The sellers hadn’t declared any flood risk to their property in their Home Information Pack.

The couple decided to launch legal action against the previous owners, Robert John Corson and his wife Margaret, claiming they knew about the problem all along.

And to support their claim, they have unearthed an apparently damning entry on Mr Corson’s Facebook page from July 3, 2012, showing the back garden flooded, accompanied by the comment: ‘Our garden during the deluge.’

The Edwardses say, when they were buying the house, that the vendors ticked a box on the Property Information Form saying there were no flooding problems.

The Edwardses, who are still living at the house, have applied for ‘rescission on the sale contract’ – meaning they would move out and the Corsons would take the property back and have to refund them the full amount paid. They also want their mortgage payments refunded and damages for ‘physical inconvenience and mental distress’. In one instance after the 2011 floods in Brisbane, the buyer and seller of a flood-damaged property could not agree on what to do. Queensland’s Court of Appeal in the case of Dunworth v Mirvac ultimately ruled that a woman buying a $2.155 million river-front apartment in Mirvac Queensland Pty. Ltd’s up-market Tennyson Reach development had validly terminated her 2007 off-the-plan contract because of significant damages caused to the apartment by the January 2011 flooding.

After Mrs Dunworth had earlier attempted to escape her now over-priced purchase contract on the basis of alleged false, misleading and deceptive representations by Mirvac particularly regarding the apartment’s elevation, Mirvac obtained a Supreme Court order obliging Mrs Dunworth to settle the contract (and pay some $500,000 interest) by 8th February, 2011. Less than a month before that date, along with thousands of other Brisbane and Ipswich properties on or near the river, the Brisbane River flooded this ground-floor apartment.

Although Mirvac generously offered on 24th January 2011 to restore the extensively damaged and apparently uninhabitable apartment to original condition at its own cost over a period of four months (and waive its right to default interest), Mrs Dunworth rejected this offer. Instead, she promptly purported to rescind the contract in reliance on Section 64 of Queensland’s Property Law Act 1974. This Section permits such a buyer’s action where, before the “date of completion” of a residential contract, the property is so damaged as to be “unfit for occupation”.

The judge ordered the settlement variation sought by Mirvac to 8th June 2011 without prejudice to Mrs Dunworth’s right to maintain that she had validly terminated under Section 64. The proceedings were to be placed on a court list for a later trial.

Mrs Dunworth promptly took her case to the Court of Appeal.

On appeal Mirvac conceded that the apartment had been unfit for occupation at the time of rescission. Hence the only major legal question to be answered was whether Section 64’s “date of completion” could include a “date for completion” ordered by a court against a defaulting buyer. Section 64 applied in either case, the court held. No ruling was given otherwise on the interpretation of this Section, although the court noted that it “gives no right to a vendor to maintain the contract in order to attempt to repair the damage”. The possibility of restoration does not preclude rescission, the court explained, “where the premise of the provision has been met.”

How To Protect Yourself From Buying a Flood Prone House So if you are looking to buy in Queensland, or anywhere else for that matter, remember to ask about flooding. No matter what sort of reply you receive, still make your own independent enquiries. Ensure your solicitor adds a special contract condition permitting you to cancel if council searches reveal that you may be looking at a flood prone house. Your solicitor won’t find such a condition too difficult to draft.

Many properties may be on the outskirts of a flood susceptible area, but they may not have necessarily had flood waters damage them. In order to find out the flood history of the property you wish to purchase (or have purchased), look at the flood zone maps. The flood zone maps in Brisbane have been updated since the January 2011 floods that inundated many parts of Brisbane and Ipswich.

If the house you’re thinking of buying did go under water, you need to consider whether you want to take the risk of living through a flood (and paying the associated insurance costs).

For assistance with conveyancing and property law, make sure you contact us today. We offer a FREE, 10-minute phone consultation, and we are experienced in handling property disputes.