Can You Change Your Child’s Surname? 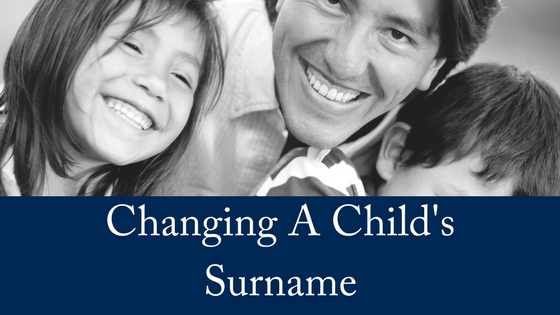 If you’ve been through a relationship breakdown and you have children together, you may be thinking about the child’s surname. What if you get remarried and you want them to have a different surname? Changing your child’s surname is a legal issue, and may not be as easy as you think.

Can You Change Your Child’s Surname?

The Family Law Act 1975 creates a presumption that both parents have shared responsibility for decisions about the welfare and care of the child, which includes the child’s surname.

This applies to most situations unless the Court has made an Order which specifically names one parent as having sole parental responsibility for the child.

The starting position is that a change to a child’s name is considered a major long term issue under the Family Law Act 1975 (Cth). This means that parents must consult with each other before making a decision to change the child’s name, including by hyphenating it.

One parent cannot legally change a child’s surname unless: A recent Full Court decision in Queensland dismissed a mother’s appeal from a decision at first instance restraining her from changing her children’s surname.  In refusing to allow the mother to change the children’s name the Court considered the following:

In the recent case of Reynolds & Sherman (2015) FAM CAFC 128, it was recognised what a substantial issue the change of a child’s surname is. The Full Court observed that the dispute over a child’s surname is a matter of “real importance” and adequate court time should be allocated in order for the court to consider such an important issue.

If you have any questions about family law, divorce, parenting arrangements or property settlements, contact us today. We offer a FREE, 10-minute phone consultation.