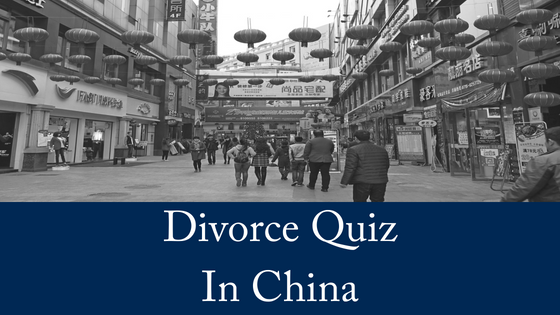 In some parts of China, married couples seeking to split up have been asked to take a divorce quiz issued by the local authorities. The more they knew about each other — including a spouse’s birthday or favorite food — the less likely they were to have the divorce immediately approved.

The quizzes, issued in at least two provinces since last year, follow the format of a typical three-part school exam: fill-in-the-blank, short answer and an essay. Questions include the mundane — “When is your anniversary?” — and the philosophical: “Have you fulfilled your responsibility to your family?”

The divorce rate in China is rapidly rising, driven largely by working women who feel newly empowered to seek one. But the government is trying to slow the trend, which it sees as a source of social instability.

The divorce quiz — 15 questions, scored on a scale of 100 points — was developed as a way to prevent “impulse divorces,” Liu Chunling, an official in Lianyungang, a city in Jiangsu Province, told The Yangtse Late News. Local news outlets reported that the authorities considered a score of 60 points or higher to mean “room for recovery,” and those couples were encouraged to work on their marriages.

Nearly two million Chinese couples divorced in the first half of 2017, an 11 percent increase from the year before, according to state news media. About 3 percent of all married couples sought a divorce last year, up from fewer than 1 percent in 2002, according to iFeng, a state-owned news channel, which cited the Ministry of Civic Affairs.

Mr. Liu said the divorce quiz was meant only to be a starting point, not the deciding factor in whether a couple could split up. But at least one couple’s high score resulted in the authorities’ preventing their divorce in another province last year.

A court in Yibin, a city in Sichuan Province, refused to grant the couple a divorce in September after citing their stellar test scores, according to local news outlets.

More than 70 percent of divorces filed in China last year were initiated by women, The South China Morning Post reported, citing the Supreme People’s Court. In most filings, incompatibility was given as the major reason; 15 percent cited domestic violence. However, a smaller number of divorces appear to be shams resulting from a quirk in Chinese real estate law. Some cities limit the number of properties a married couple can own. By legally divorcing, a couple can buy more real estate in some of the world’s most expensive cities.

The state’s focus on preventing divorce, experts said, stems from a Confucian belief that a stable society is made up of complete families.

“Only through thousands of harmonious family units can an entire society achieve harmony,” said Mr. Liu, the Lianyungang official.

“Marriage and family are seen as a stabilizing force, and the government wants to keep men and women in marriages,” said Leta Hong Fincher, author of “Betraying Big Brother: The Feminist Awakening in China.”

Chinese internet users were quick to criticize the divorce quiz after a copy of Lianyungang’s was posted on Weibo, a popular microblogging site, by the city’s Civic Affairs Bureau.

In Australia, you don’t need to complete a divorce quiz to apply for a divorce. Australia has a no-fault divorce law.

To apply for a divorce at the Federal Circuit Court, you or your ex-partner must:

The court will need to make sure proper arrangements have been made involving children before allowing a divorce to proceed.

The court will want to know:

You’re considered separated when you stop living together as a couple.

After separating, one person may move out of the home, or you may be still living at home together but having separate lives—this is called ‘separation under the one roof.’

You may have to prove these living arrangements to agencies such as Centrelink. When deciding if you’re ‘separated under the one roof’, they’ll consider whether:

There are time limits to applying for a property settlement under the Family Law Act. You must apply within 1 year from the date your divorce order has taken effect.

If you’d like assistance with any aspect of separation and divorce, please contact our friendly, experienced team today. We offer a FREE, 10-minute phone consultation.