Did This Dying Woman Suffer Coercion? 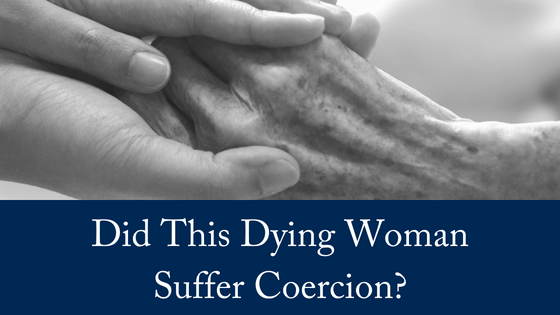 An estate battle has erupted in the United States between three sisters, one of whom is accused of using coercion against their increasingly frail, dying mother to change her will.

In February 2011 Mary Redmond died. She was 98. A retired nurse, predeceased by her husband, who was one of the region’s most prominent physicians, Redmond was by some accounts a woman still of keen mind and wit when she died. By other accounts — including two other daughters and other relatives — she was of failing mind as well as health.

Now, her intentions for her financial estate are the focus of a bitter and protracted courtroom fight. She left the money — about $1.5 million — and her Brighton home to the youngest of three daughters, Sheila Redmond Tamme. This meant her other two daughters – Martha Dillard and Mary Patrice Condon – were largely cut out of her will, and both have launched legal action against Tamme, accusing her of the coercion of their mother.

In November, the legal case spawned by the estate will reach the regional appellate court, which will be the third courtroom to hear parts of the litigation. But the very crux of the debate — the question of whether Mary Redmond was competent or “unduly influenced” by her youngest daughter when she changed her will — has hardly been the focus of courtroom arguments.

Instead, Tamme has been embroiled in litigation with the law firm of Woods Oviatt Gilman, which charged her nearly $400,000 for estate and litigation work it performed from 2011 until early 2013.  Tamme accuses the law firm of malpractice, alleging it saw her and the estate as ripe targets for cash.

As well, court papers allege that Tamme, who cared for her mother in her final years, drew heavily from her mother’s finances before Redmond died. Her mother had agreed to give Tamme access to the account and allowed her to withdraw money.

In December 2007, about a month before her husband’s death in early 2008, Mary Redmond had a will completed. In that will, she directed that, if she outlived her husband, the estate would become a trust that would be divided equally among the three daughters, who could get their shares when they turned 60. (Tamme was then 56; her sisters were both over 60.)

After Dr. Redmond’s death, Sheila Redmond Tamme, who lived in St. Louis with her husband, Michael, often returned to Brighton to help her mother. Tamme said she helped as needed around the house. “We were very close,” Tamme said. There also were part-time caretakers who assisted with Redmond in her final years.

Both her father in his last days and her mother in her last years decided that Tamme and her husband, who unlike Tamme’s sisters did not have children, might need more financial support, Tamme said.

Using a local lawyer who was a family friend, Redmond first crafted a will in 2008 directing all of the estate money to go to Tamme. She did the same in 2010, when Woods Oviatt Gilman restructured the will to set up a trust for financial purposes.

“She did it for me and I love her for that,” Tamme said. ” She knew I would have no one to take care of me in my old age because I have no children.”

Her sisters portray it differently. They and several other relatives this year filed affidavits claiming that Tamme was domineering with her mother, and used coercion to keep her separated from other relatives. They depict Tamme as possibly having a plan to persuade her mother to alter the will, so that she would be the sole heir of money.

Coercion, also known as undue influence, occurs when a will maker is put under pressure by the conduct of another person.  It usually involves a family member, friend or trusted acquaintance. Undue influence is when one of these people has exercised influence with the intention of forcing a desired gift in the testator’s will that is contrary to the true will of the testator.

Undue influence often, but not always, occurs in relationships where there is an inequality of power, causing the weaker party to submit to the wishes of the dominant party.

It can be difficult to prove that the will maker has been unduly influenced, but if you are one of the people who has grounds to challenge a will then it is important to speak to someone experienced in estate law. You will need someone to represent you if you decide to contest a will.  The people who usually have grounds to contest a will include a spouse, a child, a grandchild or a dependent.

Because it is a complex area of law and strict time-limits apply, if you think that you have grounds for contesting a will then you need to seek advice quickly.  For a free, 10-minute phone consultation with one of our experienced estate lawyers, please contact us today.