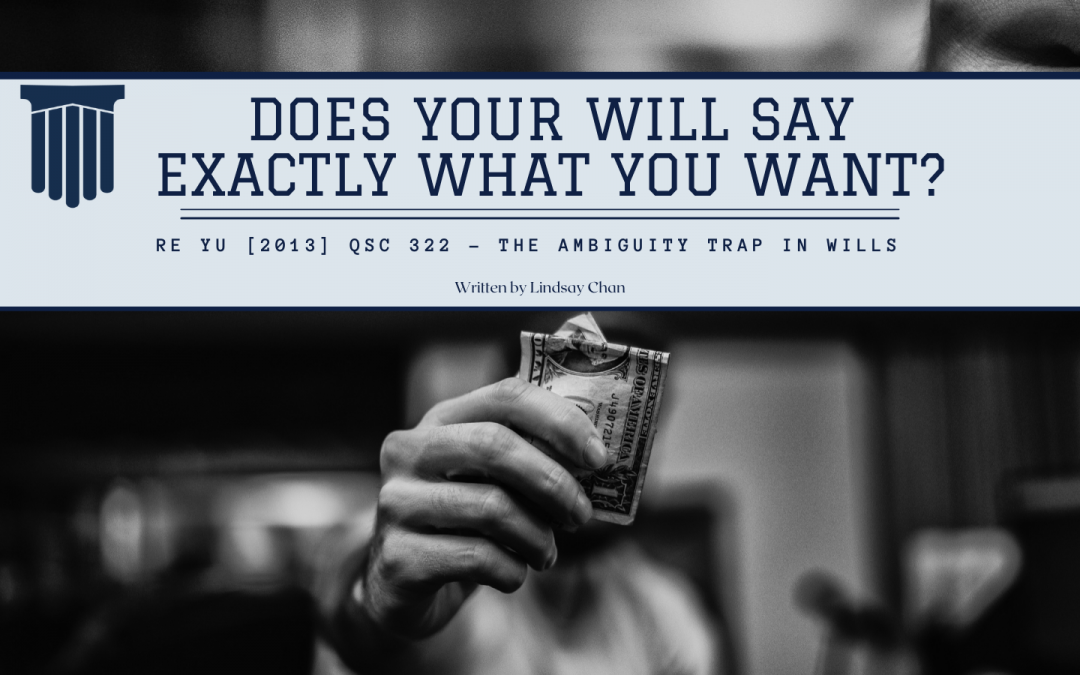 DOES YOUR WILL SAY EXACTLY WHAT YOU WANT?

The interpretation of wills can be complex and confusing and the problem with the rise of the DIY will is that although it’s easier than ever to record your wishes on whatever comes to hand and have that document admitted to probate, those wills still fall short on what is really quite important for a will, that is for the will to have a well understood meaning, which results in a further application having to be made to the court and a further cost to the estate.

Karter Yu died on 2 September, 2011 by suicide and shortly before he died he created a series of documents on his iPhone saying goodbye. There was a specific document which was referred to as his last will and testament and which appointed his brother Jason as his executor. A court case in 2013 confirmed that the iPhone entries could be construed as a document and was admitted to probate, with the costs of the application being paid by Karter’s estate.

Two years later however, Jason Yu was back in court asking for directions on how to distribute his brothers estate due to the ambiguity in the wording of his brother’s will leading to uncertainty over who was to receive what.

Karter had left specific gifts to a number of people and given his town house to his parents, before stating:

“I grant my executor all power required to deal with my affairs in the event of my death. This include all powers to sell any part of my estate not mentioned below at his discretion and be given the proceeds after any associated fees that requires paying off.”

“After all debt has been paid off including hotel bills, credit card bills etc. as well as expenditure required to execute my will from my savings account at both Westpac and Ubank, as well to cover my share of rent at 22/121 Thynne street Bruce ACT until the conclusion of the lease in late December, I would like the remainder of my cash equally apportioned between five parties: Jason Yu, Kinson Yu, Steffen Aufsatz and Dominic Clarke.”

Although Jason had remembered to include a substitution gift, by adding that if anybody rejected the gift then the cash was to be shared equally between the others, he then went on to say, “Anything else I own that has not been named is to be handled by my executor at his discretion. And any proceeds will go to him as stated above.”

When Karter’s assets were called in, the following formed part of his estate:

(b) the proceeds of a BT Financial Group superannuation policy in the amount of $23,761.70;

When the court looked at the surrounding circumstances of the will to determine the meaning they found the following:

Firstly Karter was in his early 20’s when he died and probably hadn’t considered that there would be a significant amount of money paid from his life insurance policy. Had he been aware of this would probably have made specific reference to it in his will like he had done with his property and the other specific gifts mentioned. Therefore, this amount should fall within the anything else clause and should pass to Jason along with the superannuation and the cashed up employment benefits for holidays and leave as these items were not cash.

The $61,677.41 in Karter’s bank account is cash along with the amount of $634, which was paid by his employer as wages after his death, and which, in the mind of the deceased, would have been owing to him and paid after his death would have ended up in his bank account. That amount could be considered to be “cash” and therefore distributed between the five named by Karter on his iPhone.

Unfortunately, the directions of the court came at a price. The Yu estate had already been depleted heavily by the first application to allow the iPhone documents to be allowed in probate and now an order was made that all of Jason’s costs was to be paid out of the estate. A relief to Jason, but not to the other beneficiaries who have experienced delays and now had to take a hit to the amount of amount they were originally to receive.

There’s no doubt that Karter knew exactly what he meant by using the word cash in his will but he hadn’t taken the time to calculate all the assets payable on his death, something a solicitor who is expert in wills and estates could have advised on and made sure that there was no ambiguity around the wording of the will.

In a world where everyone can become an online expert it’s easy to see how Karter was sure that he had everything covered however, the court fees evidence just how wrong he was. There’s only one way to be sure that your will says exactly what you want and that’s to seek advice from a solicitors who specialises in wills and estates.