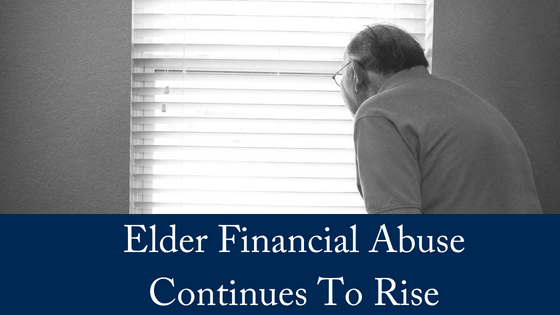 Elder financial abuse continues to rise across most Western countries, including Australia, the UK and the United States.

In the UK, more than 1,000 investigations into power of attorney arrangements were launched in the last financial year alone. These investigations found that many cases involved children attempting to swindle a vulnerable mother or father and the most serious ended in court with judges asked to strip them of the right to control their elderly parent’s finances.

One charity, which receives hundreds of calls a year regarding elder financial abuse, is so concerned about the scale of the problem it has commissioned research into it. A power of attorney is a legal document that allows the elderly and vulnerable to be relieved of the burden of managing their money, property and affairs.

The dramatic rise in people taking out powers of attorney has been put down to the ageing population and steps to make it easier to register them. As in Australia, it’s possible to obtain an online version or cheap template kit to set up a power of attorney – yet the abuse such a document can inflict is enormous.

A recent report by accountancy firm KPMG found elder financial abuse by a family member grew by 384% in the first half of 2015 compared with the same period the previous year.

In one case a woman stole her father’s life savings after being granted power of attorney, leaving his care home bills unpaid. In another, a man took £600,000 of his mother’s money after learning he wasn’t the main beneficiary of her will.

Average victims were women aged 80 or over.

Hitesh Patel, UK forensic partner at KPMG, said: “It’s likely these cases are just the tip of the iceberg, frauds of this nature often go unreported as embarrassed victims seek to ‘keep it in the family’ and ‘forgive and forget’.”

Another common scenario is when a number of siblings are tasked with operating a power of attorney but the siblings eventually become estranged. Carrie got concerned when her brothers suddenly began to exclude her from their mother’s financial affairs.  It didn’t feel right, but she wasn’t sure she could do anything about it.

Carrie and her brothers were supposed to all share authority on their mother’s Power of Attorney.  But in this scenario, one could say “no” to any decision and none of them could move forward.  They didn’t all trust each other and clearly, there was a deliberate attempt to exclude Carrie from the money decisions.

Their mother has dementia and this makes her vulnerable to elder financial abuse. A family member becomes secretive about the parent’s finances

If you are suddenly denied access to the older person’s financial information or you’re cut out of making financial decisions, be aware that this can mean a family member is not doing the right thing.

A family member lives with the parent and depends on the parent for financial support.

The most common perpetrator of elder financial abuse is an adult son, and when that son is dependent on the vulnerable parent, the risk for abuse becomes even greater.

A family member begins to isolate the aging parent from others.

When there is anyone blocking visits, restricting access of other family members to the elder, it’s another red flag. The potential abuser doesn’t want anyone looking too closely at what is going on and the method to avoid scrutiny is to keep the elder away from the other family members.

An adult child insists on being present when anyone else is with the aging parent.

This can be a sign that an adult child is threatening the aging parent if he/she talks about the financial manipulation that the elder knows is going on.  If the elder has concerns, the abuser doesn’t want the aging parent to reveal this to anyone and may have frightened the elder into silence.

A family member has a substance abuse problem and has influence over an aging parent with memory problems.

Drug and alcohol dependency can make a liar out of just about anyone who has this issue.  Memory impaired aging parents are vulnerable to requests for money to support the dependency habit.  The adult child or other relative uses the relationship with the elder to manipulate “loans” out of the elder and the elder forgets what happened or can’t make sense of it but says yes.

Cognitive impairment begins subtly at first, but the elder is vulnerable to manipulation even in the earliest stages of dementia. When names on legal documents suddenly get added or removed, it is a suspicious sign, particularly if there is no obvious need to make such changes.

Kidnapping and moving the elder to an adult child’s home without notice.

This can be a tricky situation. If you are suspicious, start poking into the situation as soon as you see the first red flag.  After the elder is removed to another location, you can lose control of efforts to help.

We are experienced in all aspects of elder law. If you suspect elder financial abuse, act quickly to limit the damage done to your loved one’s finances. Contact our friendly team today – we offer a free, 10-minute phone consultation.