Give It Back! Why Elder Financial Abuse Is A Crime 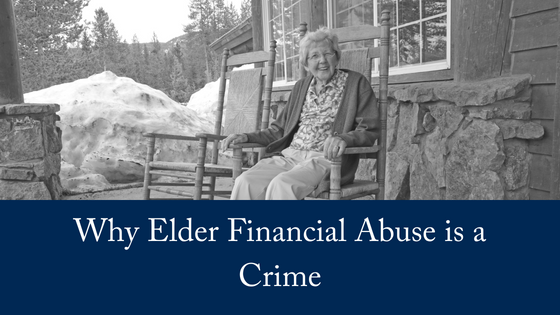 A total of $56.7 million in property and savings was misappropriated from 139 financial abuse victims in Queensland in the 2013-14 financial year, the Royal Commission into Family Violence heard. Yet it is a vastly under reported issue, and the financial loss is likely to be much higher. It’s also expected to increase as Australia’s population ages.

The Case of Financial Abuse – Give it Back!

A recent case heard by the Queensland Civil and Administrative Tribunal (QCAT) heard a financial elder abuse case involving the misuse of a power of attorney.

The matter first came to QCAT’s attention as a result of an investigation by the Public Guardian into the actions of the then Attorney of VMH. VMH had appointed her daughter, EH under an enduring power of attorney dated 24 February 2011, with the power for financial matters to begin when VMH lost capacity as certified by a medical practitioner.

The Public Guardian’s report had indicated that VMH’s property had been sold and more than $130,000 was unaccounted for; and there were unpaid nursing home fees. The Public Guardian had been able to obtain certain information regarding what had happened to the funds from the proceeds of the sale of VMH’s property, however they and the Public Trustee’s enquiries had stalled because of their being unable to obtain further information from EH. EH was to attend the Public Trustee to provide further particulars but failed to attend the appointment on two separate occasions.

The Public Trustee’s investigations revealed that the Attorney had not acted appropriately.

The Public Trustee investigation showed a mixing of monies following the sale of  the adult’s property.

“I have decided to refer EH to Crown Law based on her actions as Attorney in using her mother’s funds for her own benefit, not keeping records, not avoiding conflict transactions and not keeping property separate – all of which, in my view, amounts to not acting honestly and with reasonable diligence.”

The facts of the above case of VMH [2018] QCAT 14 are even worse than they appear in that there was an unexplained reverse mortgage taken out by the mother and no explanation as to what happened to the proceeds. The other daughter suspects that the perpetrator also gained access to those funds effectively leaving the mother, who is still alive and in a nursing home without any visible means of support. We don’t know if the daughter is or will be perused by the Department of Public Prosecutions for what appears to be blatant stealing. The good news out of this story is that the Tribunal has referred it to Crown Law to at least investigate what further steps could or should occur rather than this form of abuse being lost as if it should never be examined by the criminal justice system. This appears to be a shift in policy and a welcome one.

What to look for in a Power of Attorney

There are certain qualities and skills a competent Power of Attorney should have, which could reduce the number of elderly, vulnerable persons being exploited.

The attorney must be an honest person.   Someone with any history of dishonesty should not be appointed – even if the temptation is to believe that they’ll ‘do the right thing this time’.

An attorney should be wise with money.

A person who prefers their own advice above anyone else’s is usually the wrong person for the role of attorney.

Someone who is fair minded in the way they deal with people around them is a great quality for an attorney.

These qualities are crucial because they’ll be making financial decisions on your behalf – and choosing the wrong person can leave you in a vulnerable position.

When considering appointing a Power of Attorney, it’s important that you seek specialist legal advice. A specialist will identify any potential issues in your choice of Attorney and make recommendations about how to protect yourself and your loved ones.

If you suspect financial elder abuse is occurring, it is vital you seek specialist legal advice urgently. Once money or assets start disappearing it can be difficult to get them back. A specialist is an expert in identifying the signs of elder financial abuse and taking steps to minimise the loss.