Elton John Cut From The Will After Nine Year Feud 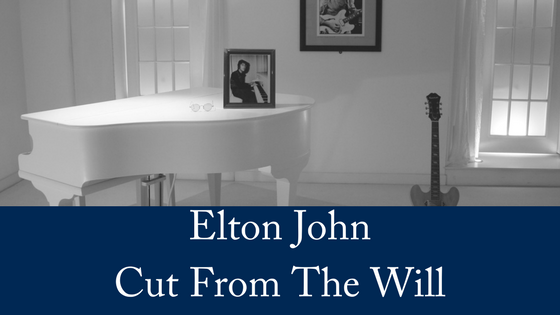 Sir Elton John has been cut from the will of his mother, who died recently. In her will, she bequeathed her famous son two ceramic urns and some family photos while his former assistant who was blamed for their family dispute is in line for half of her fortune.

The star last year got “back in touch” with his mother Sheila Farebrother, nine years after they fell out following an argument over the employment of John’s long-time friend, Bob Halley. Halley left Sir Elton’s employment, believing he had been axed – and that Sir Elton’s husband, David Furnish, was behind it. Ms Farebrother was upset at the axing and refused to cut ties.

Ms Farebrother told Sir Elton that: “Bob is like a son to me. He has always been marvellous to me and he lives nearby and keeps an eye on me.”

Mr Halley is now in line for half of her £534,000 fortune, while Sir Elton, 70, his children and his husband David Furnish have been cut from the will. It’s understood Ms Farebrother changed her will in November, less than a month before her death. A paragraph reportedly mentioning Sir Elton in the will briefly says: “I give to my son Elton John free of all taxes my two Batignani blue/gold urns and my photographs of mother in uniform and grandfather in uniform.”

To be cut from the will seems to be a final act of hostility towards her son following their very public feud. They appeared to have buried the hatchet in May last year as Sir Elton tweeted a heartfelt message to Sheila, saying: “Dear Mum, Happy Mother’s Day! So happy we are back in touch. Love, Elton.”

And after her funeral in December, he posted on Instagram to say: “Thank you for bringing me into the world and for all that you have done for me.” But her final act of changing her will just before her death may mean that the feud was not quite over.

Cut from the will: Will Elton go to court?

·  A dependent (in limited circumstances).

In this case, because Elton John is the child of the will-maker, he at least would be considered an eligible person to make a claim on the will. It is at the discretion of the court as to whether or not family provision claims are successful.  Not every applicant will be successful and not every applicant is eligible. The key is to seek advice from an expert in succession law.

In the case of Elton John, given the size of his own fortune, a judge may decide not to award him anything from the estate as  he has no need for it.

If you’ve been cut from a will or need assistance with any aspect of challenging a will, contact us today. We offer a FREE, 10-minute phone consultation.