Executor Disputes. Re: Franks [2021] QCS 134 and the remedies available for executors who just can’t agree. 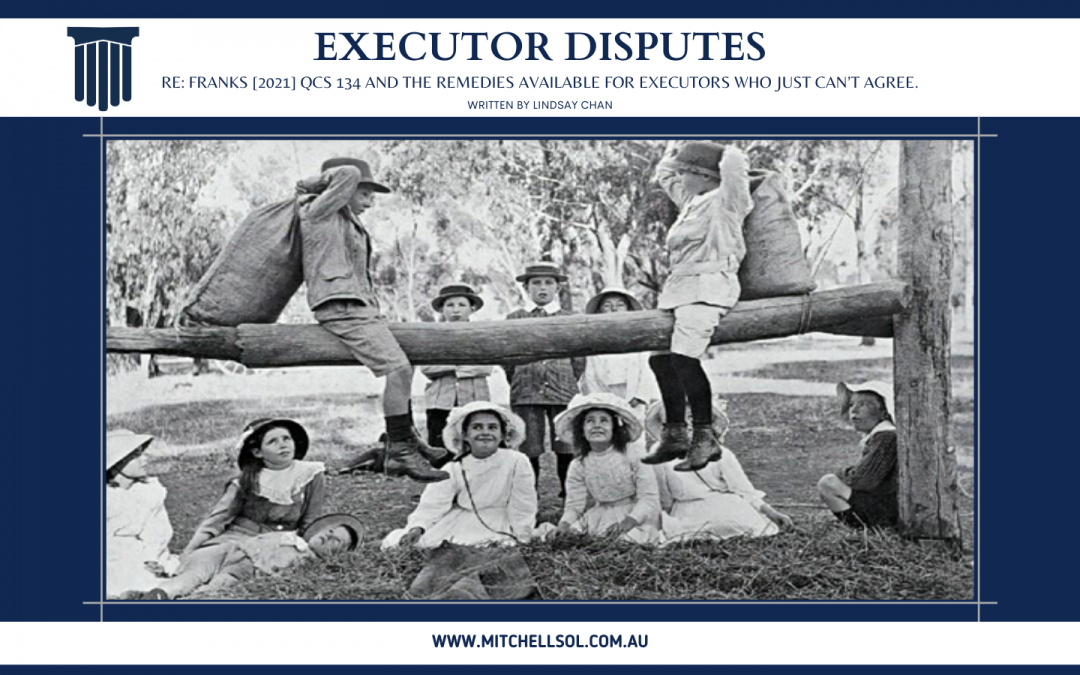 Re: Franks [2021] QCS 134 and the remedies available for executors who just can’t agree.

For hundreds of years we’ve been finding ways of settling an argument. Jousting, duals, boxing, and less physical remedies such as mediation and therapy sessions, have all been used to settle arguments. But what happens when a loved one’s estate is involved and disputes between the executors are leading to a delay in the estate being distributed. How do you settle the fight? Do you dust the pistols off or are your hands tied because the will writer named them in their will?

The good news is that  under 6 of the Succession Act 1981 QLD you can ask the court to remove the current named executors in the will and appoint an independent administrator instead. The bad news is that if it’s you making the application then it might be a bit awkward around the family Christmas dinner table.

William Franks ( Re: Franks [2021] QCS 134 died on the 4th July 2020 with his sister, five children and numerous grandchildren surviving him. When it came to his estate, William had done everything right. The will he made in November 2011 made gifts to 31 beneficiaries and named three executors to share the responsibility of administering his estate; his sister Patricia ,and two of his five children, Jennifer and Peter. Although numerous specific gifts were given as part of the will there was no significant cash or liquid assets in the estate.

The three executors’ intentions started off well and they engaged the services of a solicitor, in September 2020, agreeing that all communication to their solicitors would be joint and in writing. So far, so good. But by February 2021 the solicitors were finding it impossible to obtain any instructions at all from the three and were unable to progress the administration of the estate and informed the executors that they would be closing their file. On the 17th February Patricia had had enough of the disagreements and renounced from her role as an executor, leaving the two siblings.  Still, nothing was progressed and on the 25th March 2021 Jennifer made an application to the court that her and her brother should be replaced by an independent administrator because she believed that no agreement could be reached between her and her brother on how to administer the estate.

The main conflict centred around the funding of the estate: There were estate debts to be paid and Patricia and Jennifer had suggested that an asset should be sold to cover these but Peter disagreed. The other two then proposed that $8,000 dollars from the National Australia Bank be used to pay for the insurance on estate assets but Peter disagreed. No agreement could be reached on how to cover these estate debts and none of the executors had even opened an estate bank account. Despite this lack of progress Peter had made two applications to the court for further provisions out of the estate to him.

There were also a number of disputes between the other siblings who were beneficiaries to the will. Acting as executor, Jennifer suggested that all the siblings meet together to discuss the will but Peter disagreed and refused to attend the meeting. It’s no wonder that at this point, Jennifer threw in the towel and made an application to the court for her and Peter to be removed as executors and an independent administrator appointed to sort things out.

Unsurprisingly, Peter once again disagreed with his sister. He told the court that he had taken a number of steps to progress the estate albeit, that he had done this without consulting Jennifer and that he wanted to respect his father’s wishes that he and Jennifer be executors of the estate and expressed concern about the cost of an independent administrator.

There was no question that an independent administrator could be appointed. by the courts. The real issue for them to resolve was whether Jennifer and Peter should be removed as executors.  The court considered what is in the best interest of persons who have an interest in the estate, including creditors, beneficiaries and it’s due administration but there’s no precondition of the executors failing to fulfil their obligations before the court’s power can be exercised.

Additionally, the court must also consider the intentions of their father who chose both Jennifer and Peter to administer his estate. The court agreed it would also be a mistake to presume that William had anticipated that disputes would arise between the two siblings and in this case, because there was no practical way for Jennifer and Peter to advance the administration of the estate, then their father’s wishes should give way. The application was granted, an independent administrator was appointed and Jennifer and Peter’s roles as executors were revoked.

If you’re thinking about how your chosen executors are going to fare when the time comes to administer your estate or if you’re an executor that’s struggling to reach agreement with other executors then seek advice from a specialist in wills and estates.  A great number of executor disputes are quite avoidable (with the right advice).