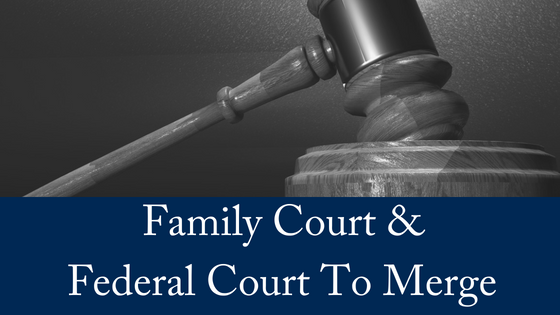 The government has announced the merger of the Family Court and Federal Circuit Court into a new entity from next year, saying that a shake-up of the family courts will aim to reduce the crippling delays and backlogs that have kept families in limbo for years in the heat of divorce settlements and custody disputes.

It will provide a “single point of entry” for all family law matters, under a single chief justice, which the government says will enable cases to be more efficiently allocated between two court divisions.

“The enemy to the good in family law is long wait times, large legal fees, too great a number of interlocutory appearances before the court,” Attorney-General Christian Porter told Fairfax Media.

Each year about 22,000 people apply for final orders – cases requiring determination by a judge – and the court system has struggled to keep pace with demand. The number of pending cases has grown to 21,000 from 17,000, and 42 per cent of pending Family Court cases are more than 12 months old.

The median waiting time for cases to go to trial has blown out to 17 months in the Family Court and 15 months in the Federal Circuit Court. And about 1200 cases a year are shunted between the two court systems, requiring families to “start over again” before a new judge.

These failures have been conceded in stark language by its most senior members. Former chief justice Diana Bryant last year acknowledged “the system is letting people down”, while Federal Circuit Court Chief Judge William Alstergren labelled the ongoing delays “unacceptable”. In March, outgoing Family Court Justice Stephen Thackray described the overlapping jurisdiction between the two court systems as a “bizarre” structure that confused “the hell out of everyone”.

While the new system will immediately end the problem of cases being shunted between two courts, it will retain two separate divisions within the amalgamated Federal Circuit and Family Court of Australia. However, one of the divisions will be gradually phased out.

Mr Porter conceded there were “more radical ways” to change the family law system but said this one was “the least impactful on the existing personnel” and was also most likely to survive a potential constitutional challenge threatened by at least one Family Court appeal judge.

Under the new structure, appeals will be heard by a specially created division of the Federal Court. The merger also pre-empts a review by the Australian Law Reform Commission, which is reviewing the family law system for Mr Porter by March 2019.

The Federal Circuit Court was established under John Howard as the Federal Magistrates Court to alleviate higher courts of less complex cases. It now hears 90 per cent of family law matters, and 85 per cent of its jurisdiction is consumed by family law.

Queensland Law Society president Ken Taylor said QLS was “interested” to see the plans to amalgamate the existing Federal Circuit Court of Australia and Family Court of Australia but noted the need for “significant change” to the court system to be considered in a holistic manner as part of the large-scale review already underway.

“At this stage, we are unclear how this [new-look court] fits into the current family law review being conducted by the Australian Law Reform Commission,” he said.

“There must be wide consultation on such a significant change to make sure it hits the mark. We support improvements to our court systems but know the devil is always in the detail.”

Australian Women Lawyers supported the taking of steps to address delays and chronic resourcing limitations in the family courts, but flagged that changes aimed at improving those courts must be supported by suitable resourcing and funding.

“The Family Law Courts system is in dire need of change that goes beyond a mere facelift,” the association wrote.

“The actual impacts of the proposed restructure and commitment to the required level of change will be seen following implementation in early 2019.”

The Law Society of NSW offered “in-principle” support for the proposed federal changes, saying the ongoing delays of the family law system had been a primary concern for the profession.

But it also acknowledged the need for better resourcing and funding in the implementation of any changes.

“The Law Society is firmly of the view that the system also requires additional resources to cope with the increased complexity of matters and the current unmanageable workloads of many judges,” president Doug Humphreys said.

“While a merged court with a single set of rules, procedures and forms appears to be a step in the right direction, additional resources are an urgent priority ahead of the commencement of the merger [between the two courts] on 1 January 2019.”

How the merger between the two courts eventually impacts the way family law cases are resolved is yet to be discovered. Here at Mitchells Solicitors, we always advocate for a settlement that is as stress-free as possible. For friendly, compassionate advice, contact us today. We offer a free, 10-minute phone consultation.