Guardianship And The Rights Of The Individual 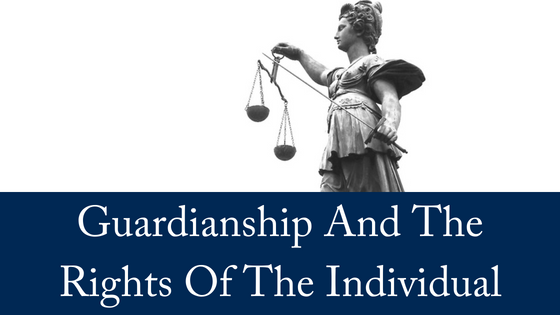 A recent case brought to the Queensland Civil and Administrative Tribunal highlights that even where guardianship is granted over an individual, that the individual may still have their rights upheld in how the guardianship is managed.

The Guardianship Case of JR

JR is 65 years old and resides in her own home. She chooses not to engage with those who attend at her residence and does not answer the telephone or reply to correspondence. JR has been subject to the appointment of an administrator since 2011. She has a history of chronic schizophrenia, which has resulted in her having impaired capacity to manage her finances.

The Public Trustee has been unsuccessful in its attempts to gain access to JR’s house to enable regular building and pest inspections, which are required to ensure that it is meeting its obligations under the Prudent Person Rule to protect the assets of JR. The Public Trustee made an application to QCAT for directions in whether to pursue trying to gain access to the house. The Public Trustee was also concerned that it did not appear that JR was receiving any support services and made an application for the Tribunal to consider whether a guardian should be appointed for her.

The first issue to be decided by the Tribunal is JR’s capacity to make decisions both in regard to personal and financial matters. In JR’s case, there were no recent reports in regard to her capacity. The reports that the Tribunal has from 2012 showed that she has a longstanding diagnosis of chronic paranoid schizophrenia. The reports indicate that JR is able to make daily personal and health care decisions except in regard to her
mental health condition and that she understands accommodation issues and has practical future plans. She was also able to make day-to-day financial decisions but overseeing of major transactions such a house purchase would be necessary.

The tribunal found that apart from the Public Trustee’s concern about services, including health services for JR, there was no evidence of any need for personal decisions for her and the application for guardianship made by the Public Trustee of Queensland was therefore dismissed. The next issue was whether JR was able to make financial decisions independently. The Public Trustee in their report to the Tribunal noted that they were paying the bulk of JR’s income into her bank account and that from their observations she was attending to payment of her expenses. This reflects the health professional’s reports provided to the Tribunal. The Public Trustee provided copies of JR’s bank statements for the last year to see whether this would show any patterns which may be indicative of how well JR is able to manage at least her day to day finances.

JR has considerable other cash assets and her home which are under the control of the Public Trustee of Queensland as her administrator. The health professional reported that JR has been vulnerable to financial abuse and she has impaired capacity for financial decisions except day-to-day decisions. JR has a house and substantial cash assets, which require administration. The tribunal found that the existing arrangement whereby the Public Trustee has ensured that JR’s day to day financial needs are met by paying sufficient funds to her to meet those needs, and has protected her other assets continues to be sufficient. Despite JR’s refusal to allow inspections in her home, the tribunal found that:

I am satisfied that there is a continuing need for JR to have an administrator to manage her assets but that she is able to manage her day to day finances.

The final issue involved regular inspections of JR’s home. The Public Trustee made an application for directions in regard to JR’s house as they had not been able to gain access to perform their usual inspections and were concerned that this may result in them not meeting their obligations in regard to JR. The Public Trustee made an application to the Tribunal for directions in regard to its obligations to inspect JR’s residential property. The Tribunal agreed that in the absence of specific concerns about JR’s ability to act independently, the administrator is directed that it is not required to undertake any inspections of the JR’s property.

Guardianship can be a tricky issue for families to manage, as each case is unique. If you have any questions about a loved one’s guardianship, contact us today. We offer a free, 10-minute phone consultation.