How To Protect Your Estate From The Ones Who Have Hurt You The Most. Re Estate Luce; Turch v Tripolone [2020] NSWSC 117 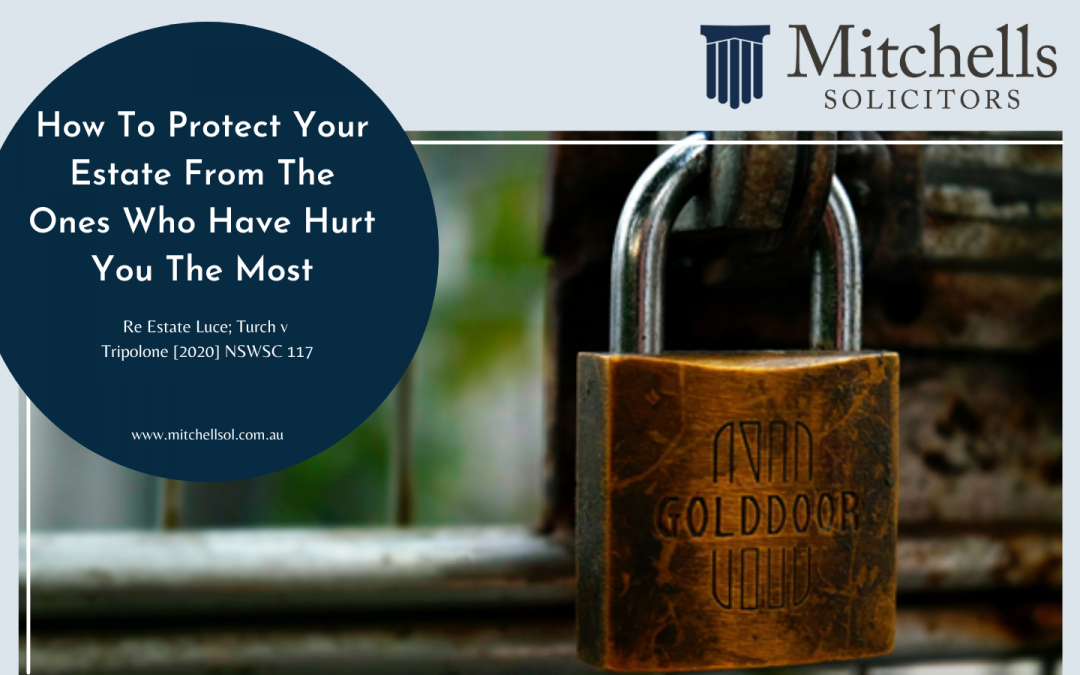 You can choose your friends but you can’t choose your family and there’s family who cause so much heartache that the only option left is complete estrangement.

The principle of Testamentary Freedom provides people with the freedom to leave their estate to whomever they choose in their Will, and without any legal obligation to provide for any particular family member or other individual. However, the Succession Act 2006 (NSW) (and similar laws throughout Australia) allows courts to award family members or dependents a portion of the deceased’s estate, even though the deceased made no provision or an inadequate provision for them in the will if they can prove adequate provision for their maintenance, education and advancement in life has not been made.

If you’re thinking that your estate might be better off with those who feature regularly in your life, then how do you make sure your testamentary intentions are followed but at the same time are able to protect your other beneficiaries from the costs involved in a claim by your estranged family member for provision?

The answer might lie in Antonietta Luca, her estranged son and how the courts sought to protect her testamentary intentions.

Antonietta Luca died without making a will on 23 March 2016, aged 73 year and because she had died intestate the people who were entitled to her estate where her three children, Robert, Diana and Franco who would each receive an equal share.

Antonietta had felt trapped in an unhappy marriage to her children’s father and, when he discovered that she had been party to a long running adulterous affair, relationships within the family became acrimonious; protracted divorce and property settlement proceedings in the Family Court of Australia ensued, during the course of which the children’s father suffered a disabling stroke, following which he died; and relationships between the mother and all her children were fractured.

Robert, in particular, took his father’s side during the Family Court Proceedings and had no contact with his mother for 19 years until the time of her death. Unlike the other siblings, who eventually reconciled with their mother, with Franco returning to live with her and Diane nursing her in her dying days, Robert took no steps to reconcile with his mother and was happy not to have anything to do with her.

Nevertheless, he was to receive a third of Antonietta’s estate under the intestacy which was approximately $300,000. This wasn’t enough for Robert though and he made a claim under the Family Provision Act, claiming that he hadn’t been adequately provided for under the will as the amount wasn’t enough to allow him to purchase a home for himself and his paternal uncle who he cared for.

The courts began to look for evidence of Antonietta’s testamentary intentions and it transpired that she attended a solicitors in 2016. The solicitor’s handwritten notes of her conference with Antonietta provided evidence of an intention for the estate to be divided three ways between her three children, perhaps providing for her sons to receive their entitlement by instalments, and emphatically wanting Diana to be “in charge” of administration of her estate.

Antoniatta was deliberating between allowing her sons a third of her estate, or giving them a legacy of $300,000. The notes concluded with entries to the effect that further thought would be given to what, precisely, Antonietta wanted to do and that she may have chosen to die intestate as she was advised by her solicitor that if she left nothing to Robert he could make a claim against her estate.

The court deduced that Antonietta had adequately provided for all her children by probably choosing to die intestate and that any extra provision given to Robert would be at the detriment of both Diane and Franco. Robert hadn’t been excluded from the will nor had he been left without adequate provision and his application was dismissed.

Antonietta was warned that there was a risk of Robert making a claim on her estate if he wasn’t provided for in her will but dying intestate is a risky solution and one that didn’t avoid the costs incurred in a Family Provision Claim after all. If you’re thinking of leaving an estranged family member out of your will then the only way to go about it is to make sure you receive specialist advice from a solicitor who can advise you on the possible consequences of this decision and record your testamentary intentions in your will.

Make your chosen beneficiaries and the courts lives a lot easier when it comes to protecting your testamentary freedom and record your intentions rather than leaving it up to chance.