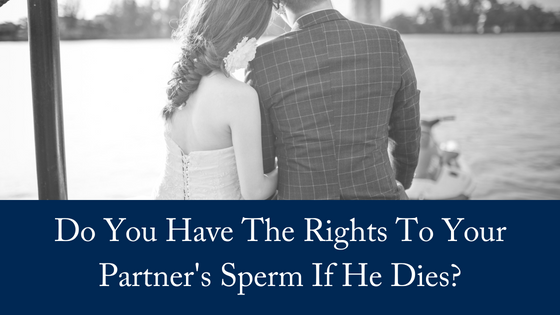 A recent Supreme Court case has highlighted a tricky question: can sperm be considered ‘property’? How can you plan for the premature death of your partner if you’d always planned to have children?

The Case
Ayla Cresswell and Joshua Davies were in a relationship when he died suddenly in 2016.
Within 24 hours of the tragic suicide of her boyfriend, Ayla Cresswell appeared before the Supreme Court of Queensland to apply for the urgent collection of his sperm.
Ms Cresswell and Mr Davies had been in a relationship for 3 years and had plans to buy a house, marry and have children together. On the day he died, Ms Cresswell expressed to Mr Davies’ father that she wished she were pregnant. Mr Davies’ parents supported her desire for children and the urgent court application that ensued.

Despite her grief, Ms Cresswell had only a 48-hour window for doctors to be able to harvest sperm from the late Mr Davies and store it for IVF.

This was not the first application of its kind, but the history would not have inspired confidence for Ms Cresswell. There has never been a successful application for the posthumous removal of sperm in Queensland. Currently, it is not lawful to take, store, transport and use in IVF a man’s sperm without his written consent. There is also a long-standing legal principle that there can be no ‘property’ in a human body, particularly in a human body.
Extraordinarily, Ms Cresswell’s urgent application was successful and the Court ordered the urgent collection of Mr Davies’ sperm. Even so, Ms Cresswell was not yet entitled to possess and use the sperm.

Over the next 2 years, Ms Cresswell underwent counselling and fertility testing. In further legal proceedings, Ms Cresswell had to satisfy the Court that:

On 20 June 2018, in a landmark decision, the Court declared that Ms Cresswell is entitled to permanently possess and use Mr Davies’ sperm for her IVF purposes. Plan for your partner’s sperm…

Recently, Mitchells Solicitors received a similar enquiry from Mrs H.
What happens if my husband dies and we have not yet had the children we want together?
Both are alive and well, but Mr H is more than 20 years Mrs H’s senior and they have a strong desire for children – even if in the unhappy circumstance only she can raise them. Together they sought our specialist estate planning advice.
Like Ms Cresswell, Mrs H might seek the urgent collection of her husband’s sperm if he dies. However the Court made it clear that the same expensive and protracted application in different circumstances may not have the same outcome.

What can be relied upon from the landmark decision in Cresswell v Attorney-General for the State of Queensland is that:
Sperm, after it is lawfully separated from a human body and preserved using “work and skill,” can constitute ‘property’ capable of being possessed.

This appears true whether the sperm is removed during a person’s lifetime or after their death.

Of course, if a donor deposits sperm during their lifetime, the donor’s consent to its removal, storage and use is critical. In that circumstance we recommend a sperm donor gives proper consideration to and makes appropriate directions as to who will be the owner of their stored sperm following their death.

The author of the above article, Naomi Wallace, is a solicitor who works with Bryan Mitchell and the wills and estates team at Mitchells Solicitors.