Who Keeps The Pets After a Divorce? 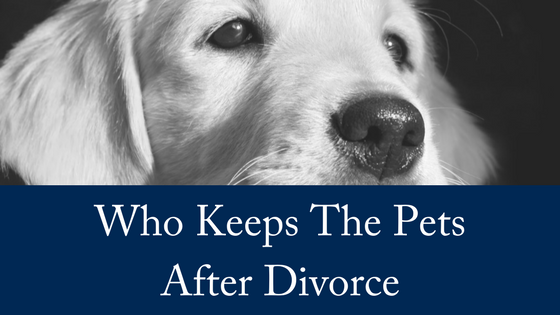 The introduction of a new law in Alaska, which requires courts to take an animal’s wellbeing into consideration in the event of a divorce, changes the way that family courts view pets, removing their status as an object or piece of property to that of a valued family member. It also allows judges to assign joint custody of pets. This may have ramifications for other Western countries, whose justice systems are similar when it comes to the treatment of pets during divorce.

“For the first time, a state has specifically said that a companion animal has visibility in a divorce proceeding beyond that of property — that the court may award custody on the basis of what is best for the dog, not the human owners,” Mr Favre said.

From a family’s point of view, a pet is often considered part of the family. The legal principle, however, with respect to pets, is that a pet (any animals, including companion animals) remain classified as the personal property of their owner (otherwise referred to as a chattel).

In a Federal Circuit Court of Australia matter, known as Downey & Beale [2017] ACCA 316, the Court had to consider this very issue. The parties had reached a property settlement by consent, but had competing claims regarding the ownership of their pet dog. In assessing the competing claims, the Court stated it first had to determine the:

Having regard to the above two points, the Court was satisfied that it had jurisdiction to make orders in relation to the pet dog. Since the dog’s worth was tied to the owners’ love and affection, rather than any monetary value, the Court needed to determine “whether any change should occur to ownership of the dog as it presently exists”.

The court examined the evidence presented by each of the parties, with answers to the following questions being key to determining ownership:

Ultimately, the wife was considered to be the dog’s legal owner, even though the husband had paid for the dog. The wife had possession of the dog, contributed to the dog’s care directly and financially, and was responsible for the maintenance and upkeep of the dog. It was concluded, under those circumstances, that it would not be appropriate to make an order varying ownership.

If the parties to a relationship breakdown are in a dispute about who is to retain ownership of the family pet, the Family Court will consider the merit of each parties’ applications in a similar way to the way in which the Court would consider who is to retain a car or the family business.

The Family Court can make orders for parties to effectively “share custody” of a pet. However, it is unlikely that the Family Court would make such orders unless agreed to by both parties.

In 2010, Switzerland held a referendum regarding a proposal by animal rights activists to appoint independent lawyers for pets subject to a “custody” dispute. Ultimately the Swiss population voted against the proposal. If the citizens had voted to implement the initiative each pet would have a lawyer to represent its’ “best interests” at taxpayers’ expense.

Although many people may think that their pet warrants consideration of the Family Court similar to the level attributed to the children, the issue becomes how would a Court actually consider the best interests of a pet?

For now, judges or court mediators have to rely on questioning both partners about their relationship with the pet, to determine who is the true owner. Australia is arguably a long way from changing the way pets are viewed through the lens of family law, but it could be an issue that affects you.

If you’d like to discuss separation and other issues of divorce, please contact us today. We offer a FREE, 10-minute phone consultation.