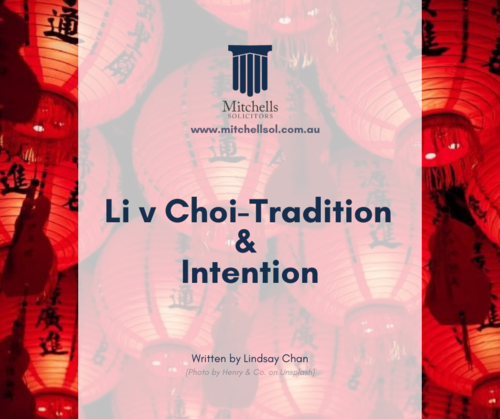 In China wills are rarely written. Acknowledging death by writing about it is considered highly superstitious and is believed to bring death closer. Although most people have thought about what will happen to their estate when they die, these intentions are spoken rather than written down to avoid bad luck. Many people in China still follow strong patriarch rules where the male children look after their parents and are rewarded for their endeavours with their parents’ inheritance when they die.

It’s no great surprise then that Xin Li, the testator in Li v Choi [2020] (QCA 131), didn’t have a will. He also didn’t have sons and didn’t have time. In 2017, he was in the last stages of terminal lung cancer at a hospital in Queensland where the nurses spoke a language he didn’t understand and where he was reliant on his nephew and a business partner, Ms Choi, who both spoke Mandarin and English for support.

Xin Li needed to have his substantial business affairs in Queensland in order and asked his support network to arrange a solicitor.

Ms Choi secured the services of a familiar face, a solicitor who had previously acted for Xin Li in business transactions but who wasn’t an estate lawyer or a Mandarin speaker. The solicitor asked Ms Choi to obtain urgent instructions from Xin Li in relation to the names of the beneficiaries and the proportion of shares they were going to receive. A video clip was sent to Ms Choi where Xin Li named four beneficiaries, his two sisters and his two daughters. When Ms Choi asked whether the estate would be shared equally, the reply came that he hoped everyone would agree.

Better to have these intentions spoken rather than written, incurring bad luck.

The will was drafted in English with all beneficiaries receiving equal shares. The solicitor didn’t speak Mandarin, the testator didn’t speak English and therefore Ms Choi would act as translator. Upon arrival Xin Li asked to see the will and immediately signed it before any advice from his attorney about the contents was given to him. He also wrote on a separate piece of paper in Chinese characters that he was undecided about the proportions to give to his beneficiaries. Ms Choi then explained that under the terms of the will the estate would be equally distributed and if Xin Li was undecided then the will would have to be amended.

The response from Ms Choi was that Xin Li wanted to cross out the word equally on the will. It was crossed out on both the signed will and the copy, initialled by Xin Li and then signed by the witnesses who were thanked by Xin Li with a formal hand gesture.

Have you seen the flaw in the plan yet? Even with the word ‘equally’ missed out there’s still no specific instruction about the division of estate and it will then still be divided in equal shares. Nevertheless, the wills were left with Xin Li with instructions from Ms Choi that when he decided on the shares to give that he should amend the will and get hospital staff to initial the changes.

No further amendments were made and Xin Li died shortly after. The will was judged intestate on the basis that Xin Li did not understand and approve of the will and although this decision was appealed it was upheld by the court of appeal with the costs of the case being taken out of the estate. Xin Li’s reluctance to commit his plans to paper had brought his beneficiaries the bad luck he was trying so hard to avoid.

What can be learnt from Choi v Li?

An ideal testator who has clear instructions about who will benefit under their will and the proportion of shares each beneficiary will receive are very rarely found. Decisions in relation to wills are usually made in times of emotional turmoil and during these times it’s important that the testator understands the potential consequences of their decisions and that this is supplemented by notes of any meetings.

It’s equally important that an independent translator is employed who isn’t known to the testator. One who can be relied on to explain the traditions of the testator’s culture and can pass on instructions as an intermediary, without the solicitor feeling like the stranger at the party.

Finally if amendments are needed then they should be amended urgently. If the solicitor had stayed until she was satisfied that Xin Li understood the repercussions of his handwritten amendments and additions then Xin Li may have been persuaded that good luck comes to those who are prepared.