What Is The Standard For Mental Capacity To Consent To Marriage? 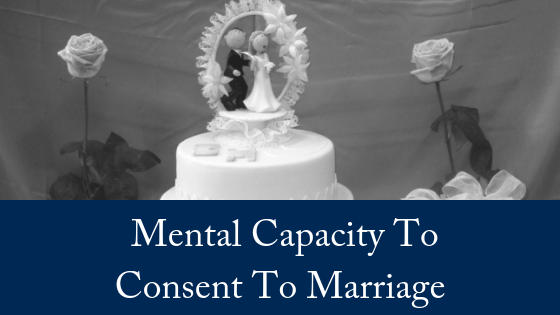 When is a marriage not a marriage? When one of the parties doesn’t have the mental capacity to understand what marriage is, it may be nullified by a court. But what is the test to decide capacity in relation to marriage?

The Family Law Act 1975 (Cth) states that a marriage is void where:
(ii) that party is mistaken as to the identity of the other party or as to the nature of the ceremony performed or
(iii) that party was mentally incapable of understanding the nature and effect of the marriage ceremony.

You may be surprised to know that the legal standard for the capacity to consent to marriage is much lower than other tests for capacity; yet the very act of marriage can affect many areas of a person’s life, including their estate planning.

The Null Marriage: The Test for Capacity

In 2017, Mr Sikander filed an application to the Family Court seeking a decree of nullity of his marriage that took place in 2006 in India to Ms Vashti.
The culturally arranged marriage took place in India, where Mr Sikander was prevented from meeting Ms Vashti prior to the wedding ceremony by her parents.
Mr Sikander said that during the wedding ceremony, Ms Vashti refused to engage, appeared disoriented and unable to follow simple instructions. She also struggled to repeat vows, affirmation and consent as had been narrated to her by the marriage celebrant.
Throughout the next four months of marriage, Mr Sikander said that she appeared unable to recognise him, would violently attack him, and was unable to undertake basic tasks or make basic decisions.

A psychiatric report dated a month prior the marriage revealed that Ms Vashti had been admitted to hospital multiple times for intensive treatment for hallucinations, delusions and depression. The psychiatrist assessed an impairment of short term memory and judgment.

The judge was required to determine whether Ms Vashti was mentally incapable of understanding the nature and effects of the marriage ceremony. The judge found that “whilst the behaviour described is not just odd, it is bizarre, I have no other evidence that would enable me to make a finding that on the day of the marriage, [Ms Vashti] was mistaken about the nature of the ceremony or that she was mentally incapable of understanding the nature and effect of the marriage ceremony.”
Justice Cronin cited her ability to dress appropriately for the wedding as an indication that she had knowledge of the ceremony in which she was about to participate.

Mr Sikander appealed this decision, at which further evidence from the psychiatrist was used to nullify the marriage.
The psychiatrist said that Ms Vashti suffered the most severe level of intellectual disability/mental incapacity and that she “did not have the mental capacity to engage in a marriage ceremony, nor would she appreciate the nature and consequences of marriage.” The appeal court found that this further evidence clearly demonstrated that at the time of the ceremony of marriage, Ms Vashti was incapable of giving the relevant consent and her consent was not a “real” consent for the purpose of the marriage and the marriage was nullified.
Understanding the nature and effect of marriage can have implications for other areas of life, including estate planning. Section14 of the Succession Act (Qld) states that the act of marriage revokes all previous wills. Yet arguably the capacity to marry is a considerably lesser standard than the capacity to make a will.

This loophole is used to great effect by those preying upon elderly people suffering from cognitive decline. The act of marriage revokes any previous wills, allowing the new spouse to take some or all of the deceased’s estate in intestacy.
What’s also concerning is that the act of marriage can revoke a power of attorney in Queensland. Section 52 of the Powers of Attorney Act states that if marriage is entered into after making a power of attorney, that document is revoked if power is given to someone other than the spouse.
This will leave duly appointed attorneys without authority to act, and they must apply to a tribunal or the court in the hope of being appointed as administrators ahead of the new spouse.

Mitchells Solicitors were involved in a case where it was clear that the marriage was not for a pure purpose.  The adult lacked both capacity to manage his finances and capacity to do a will.
Mr Lawrie was 82 years old and suffering from dementia and cognitive impairment when he married Ms Hwang. Following the marriage, Ms Hwang transferred close to $3 million from Mr Lawrie’s accounts to her own accounts.

Mitchells Solicitors were involved in securing a court made will in line with what Mr Lawrie had in place prior to it being revoked by the act of marriage.

Thankfully in a number of jurisdictions in Australia the court has jurisdiction to order a court made will where someone lacks capacity to do a will. Section 21 of the Succession Act says:
(1) The court may, on application, make an order authorising—
(a) a will to be made or altered, in the terms stated by the court, on behalf of a person without testamentary capacity; or
(b) a will or part of a will to be revoked on behalf of a person without testamentary capacity.

You may have clients who are elderly, suffering cognitive decline, are isolated or are finding basic daily tasks more difficult. All of these are risk factors for elder abuse, and marriage is often used as tool to perpetrate elder abuse. Be on the lookout to safeguard your clients.  This area of law is confronting and complicated.  It is always good to have a specialist on your side.

Bryan Mitchell is an Accredited Specialist in Succession Law (Wills & Estates) Qld. There are 13,000 lawyers in Queensland and only 45 specialists in wills and estates. Bryan is one of them. For your FREE, 10-minute phone consultation, contact us today.