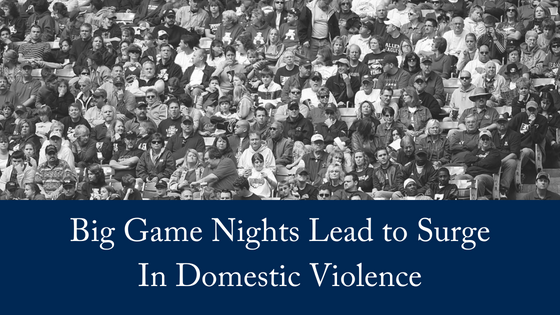 Research has shown that big game nights, such as the State of Origin and World Cup games, lead to a domestic violence surge.

Newly released data from the New South Wales Bureau of Crime Statistics and Research (BOCSAR) spanning six years (2012-2017) have revealed a 40.7 per cent average increase in domestic violence and 71.8% in non-domestic assaults across New South Wales on State of Origin game days.

The Centre for Alcohol Policy Research (CAPR) at La Trobe University examined the data set of recorded domestic and non-domestic assaults in NSW on Wednesday nights (between 6pm Wednesday to 6am Thursday) for the weeks around State of Origin games.

The dataset included every Wednesday from two weeks prior to the first game of each series to two weeks after the final game (11 weeks per year). Data from Victoria were included as a quasi-control measure, given the substantially lower interest in rugby league in that state.

CAPR Deputy Director, Dr Michael Livingston said the domestic violence surge on State of Origin game night was significant and consistent in NSW across the three-game series in each and every one of the years examined.

“In the twelve-hour window from 6pm to 6am on State of Origin game night, women and children in New South Wales are almost 40 per cent more likely to become victims of domestic Violence. This is a significant and consistent spike across the three-game series in each and every one of the years examined.

“Of note, when we compare those findings with Victoria, a state with less interest in rugby league, the data reveals no statistically significant increase in violent assaults on the dates in question,” Dr Livingston said.

Foundation for Alcohol Research and Education (FARE) Chief Executive, Michael Thorn says it is very apparent that the State of Origin games are driving a domestic violence surge in NSW.

“It’s crystal clear that the State of Origin fixtures are leading to a surge in domestic violence. It’s happening on the National Rugby League’s watch and women and children are being harmed as a direct consequence of these games,” Mr Thorn said. The National Centre for Domestic Violence, the National Police Chiefs’ Council and the BBC have all conducted research into the correlation, but the largest research into the topic came from Lancaster University in 2013, which analysed domestic violence figures from the 2002, 2006, 2010 and 2014

The study, which focused only on Lancashire and was published in the Journal of Research in Crime and Delinquency, reported that that instances of domestic violence rose by 38 per cent when the England team lost a game and by 26 per cent when the team won or drew.

Domestic violence incidents were 11 per cent higher the day after England played, whatever the outcome, and were at its highest at a weekend or when the team exited the tournament.

FARE Research Manager, Dr Melanie Pescud agrees that that link between domestic violence and State of Origin games is indisputable, and has called on the NRL to tackle the issue head-on.

Dr Pescud said that some immediate measures, such as alcohol’s prominence in the NRL, should be addressed by the sporting code.

“With half of all reported DV incidents in Australia involving alcohol, the saturation of alcohol sponsorship in the Origin series and the NRL more broadly is something the code must address,” Dr Pescud said.

Anabelle Daniels, CEO of Women’s Community Shelters says there is a reported increase in referrals to crisis shelters the day after major sporting events in NSW.

She said it would be interesting to see whether there were different figures on nights when there was a loss.

And it’s not always a matter of physical violence, according to Ms Daniels.

“If someone’s been paid, they’ve taken the family’s spending money and blown it all on gambling on a big event and lost, that can have a pretty significant impact for the family,” she said.

Ms Daniels said it would be useful to look at broader patterns across various sporting events.

“NSW has a suspect target management plan where known domestic and family violence are kept under close watch by the police,” Ms Daniels said.

She suggests that police could use information about sporting events to assist with prevention or early intervention.

If you need assistance with any aspect of family law, please give our friendly and experienced team a call today. We offer a FREE, 10-minute phone consultation.