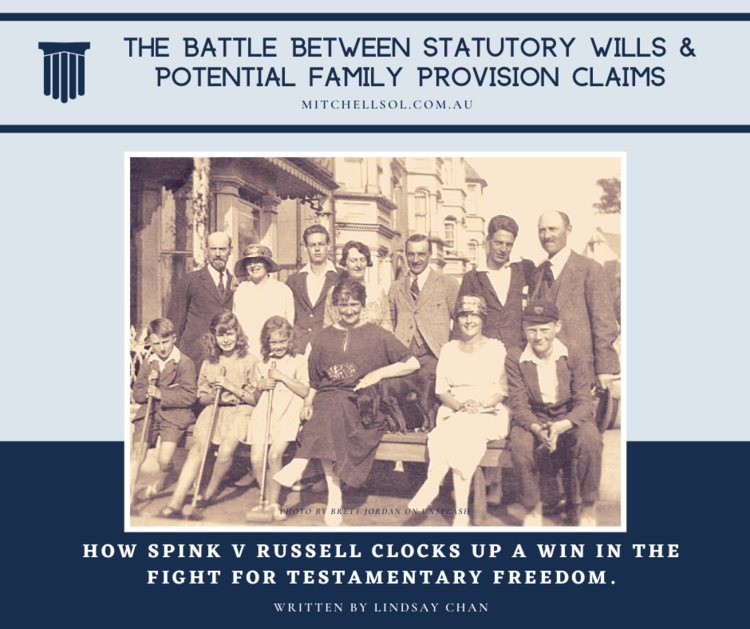 How Spink v Russell clocks up a win in the fight for testamentary freedom.

Testamentary Freedom- the principle that a person can leave assets in their will to whomever they wish — and leave out those who might expect to inherit, is a fundamental principle of law. However, recent decisions made by the court under the Succession Act 1981 (Queensland) seem to have sidestepped this principle in favour of beneficiaries.

In these present times the family unit can be ever changing. There are divorces, new marriages, children from previous relationships and new step children to take account of when making financial decisions about your estate, and in Queensland the law casts an obligation upon a willmaker to make adequate provision for these people.

Taking advice from a wills and estate specialist can reduce the likelihood of a potential claim on your estate but under the Succession Act 1981 (Queensland) a Family Provision application allows eligible persons to make an application to the court seeking that adequate provision be made for their “proper maintenance and support” from a deceased person’s estate.   There are similar laws all throughout Australia and indeed other common law countries.

In effect, you may have done everything possible to provide for each family member but the court has the power to amend your gift, after your death, on the basis that more provision ought to have been made with not much thought given to testamentary freedom and your views on what should happen to your hard earned assets.

This is completely at odds with an application for a statutory will (a court made will), when a person lacks capacity, where the court is considering whether to authorise a new will or make alterations to an existing one. Here the courts aim to do what the will maker might have done if they still had capacity.

So what happens when a statutory will application and a potential Family Provision application collide? Is testamentary freedom now a thing of the past and the Succession Act takes precedence, with the court assessing how assets are to be divided? How can you be sure that the decisions made in your will are protected?

Spink V Russell [2019] is only the second statutory will matter to be heard by the Queensland Court of Appeal, but in a society where the ageing population is growing year upon year it’s likely that the issues raised will become more and more relevant. The Spink case provides essential guidance regarding the relevance of a potential Family Provision application in statutory will proceedings and how the courts should deal with it.

MAG and her husband Tony had been very successful and had a large estate, thanks to a business they had built together. MAG’s and Tony’s family consisted of their 2 children, Shaun and Christopher, and Tony’s 2 children from a previous relationship, Kevin and Michelle.

Michelle was the only child who hadn’t been involved in MAG’s and Tony’s life and business. Tony had left Kevin and Michelle with their mother and Michelle had continued to live in the UK with no involvement with Tony. Kevin, on the other hand came to live with Tony and MAG when he was 17 and was treated in the same way as their biological children.

In 2014 both MAG and Tony made wills leaving the whole of each other’s estate to the survivor with a specific gift of $1 million left to Michelle, which was different to the money left to the other children, who had retained a close relationship with Tony and MAG. MAG’s capacity began to decline and in 2017 her attorneys started looking after her affairs. There had been a number of changes in the business since 2014, more recently involving MAG’s son Shaun, and the existing will needed to be amended to reflect this. Therefore, a statutory will application was made by MAG’s attorneys.

In the application, MAG’s attorney confirmed that he had discussed the new will with MAG on numerous occasions and her wishes had remained consistent. Although there were changes to the will in relation to gifts to Shaun, the other children, and grandchildren, MAG’s wishes were that the gift to Michelle should remain at $1 million in accordance with the 2014 will. When Michelle received notice of the application she threatened to make a Family Provision application when MAG passes, if her gift was not increased substantially to $5 million in line with Shaun, Christopher and Kevin.

The Judge allowed Michelle’s application to be heard and ordered that a statutory will be made in the form proposed by MAG’s attorneys with the exception of Michelle’s gift, which should be increased to $4 million. In making the decision the Judge took into account the likely financial toll on the estate of a Family Provision application and thought that MAG was likely to have increased her gift to Michelle to avoid this litigation.

A shot across the bow of testamentary freedom.

MAG’s attorneys duly appealed on the basis that the Judge had been mistaken in thinking that MAG would have altered her gift to Michelle to $4 million and sought an order that Michelle’s gift be altered back to the original $1 million as per the 2014 will. The appeal was allowed as there was no evidence to suggest that MAG would have altered her will to leave Michelle more money. There were contemporaneous file notes and a subsequent letter from the solicitors who drafted the 2014 will warning of a risk of a Family Provision application by Michelle which evidenced that both Tony and MAG had been made aware of a potential claim by Michelle when taking advice on the 2014 will but had still chosen to go ahead. There was no evidence to suggest that MAG’s feelings towards the amount of money left to Michelle had changed and the appeal Judge allowed an order authorising the will in the terms originally proposed by MAG’s attorneys, with the gift of $1 million to Michelle remaining unchanged.

Unfortunately, the war for testamentary freedom might not yet be won. It seems likely that Michelle will bring a Family Provision application following MAG’s death where the court will then answer whether Michelle has been left with adequate provision by her stepmother. However, the court has made it clear that the requirement to inform the court of a likely Family Provision application doesn’t mean that the court must then evaluate potential applicants to ensure the new will the court authorises satisfies their potential claims.

When someone lacks capacity and an application is made for a court made will, the courts must act in a protective nature and ask what is in the best interest and benefit of the person who lacks capacity. There will be instances where it’s open to the court to find that they would make a will which satisfies a Family Provision application, but where the evidence clearly precludes such a finding, as in Spink, then it will not be in the person’s interest to authorise a will which provides for this contingency.

If you want to protect your testamentary freedom then it’s important that you seek legal advice from a wills and estate specialist who will advise you on any potential Family Provision claims on your estate and strategies on how to avoid such claims (which are in addition to make a will).  As well as making detailed notes on the instructions they take and the advice that they give, they will also confirm their advice in writing, which should be kept with your financial documents to substantiate your choices, along with a letter that explains the choices you have made and why you have made them.

At Mitchells Solicitors we work tirelessly to protect your testamentary freedom so contact us to have a chat about how we can continue to fight your corner when you’re no longer able.