The Leach Case & Adequacy. A Cautionary Tale For All Family Provision Applicants And The Solicitors They Instruct 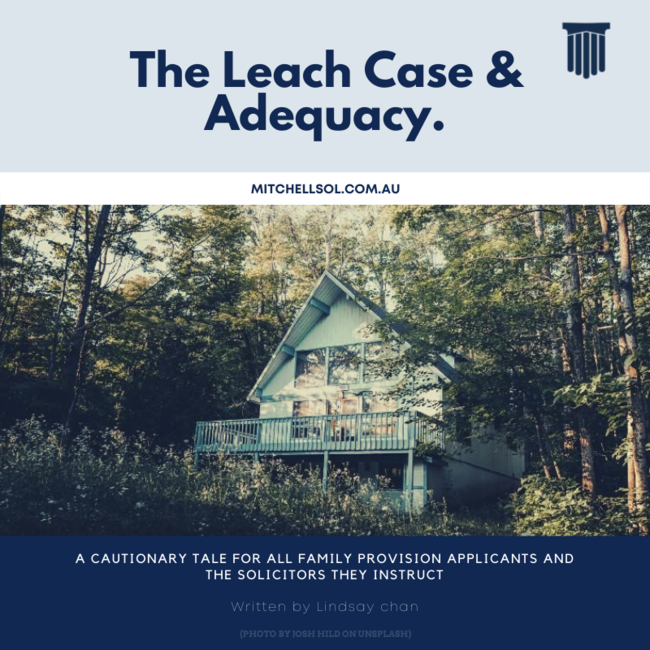 There was once a man who wanted to make a will that was fair. One where his 3 sons from a previous relationship were taken care of equally, where the Public Trustee of Queensland (“PTQ”) was appointed as the executor and trustee to avoid any family disputes and one that made adequate provision for his partner of 18 years.

So the man, George Davies, signed a will in 2013 that allowed Isabelle Leach to reside in his property on Alice Street, Bundaberg, for a period of up to 5 years following his death, and when the property was sold, the sale proceeds were to be split: 50% to Isabelle and the other 50% to be divided equally between his three sons: Rodney, Peter and Gregory.

A well drafted will which was equal and adequate for the ones George Davies loved the most, you might think, and it was certainly what George Davies thought.

When George died in 2018, not everyone thought that the will had provided adequately for them. Isabelle is now 81 and continues to live on Alice Street but says she struggles with her pension whilst also paying for the upkeep of the house. The future rental expenses when she leaves the property will exceed the 50% of the estate she will receive and is insufficient to cover her ongoing expenses.

Isabelle Leach is annoyed. She says that George had promised her that he would leave her, and only her, the house when he died. They had both contributed to the house over the years and she had owned a property but sold this shortly after she met George, using the money to buy things that benefitted them both.

Isabelle believes that a much fairer split of the property would be for her to have 75% of the proceeds of sale which is valued at $87,568.75 and the sons would share the 25% between them which would amount to $29,189.58. After all the sons all have they own homes, have adult children and are in a significantly better financial position than her. Although the executor agrees to Isabelle’s suggestion, the sons do not and file statements alleging discrepancies in Isabelle’s financial disclosure.

Isabelle meets the statutory pre-conditions under s 41 of the Succession Act 1981: the claim was made within 9 months of the death of George, there is no dispute that Isabelle and George had a de facto relationship, and she believed she had a need for further provision from the estate.

And so an application was made under s 41 for adequate provision to be made for Isabelle’s proper maintenance and support, with a further application within the proceedings that an order for further provision is made out of the estate without the need to proceed to a trial, which would greatly diminish the size of the estate.

But was the provision for Isabelle really inadequate?

No order under s 41 can be made unless the applicant has been left without adequate provision for their proper maintenance and support having regard to:

Once Isabelle’s financial provision was scrutinised by the court, it turned out that her financial position wasn’t as precarious as originally thought. The house didn’t have to be sold, there was another 2 years and 8 months left. In any event, Isabelle’s position would barely be improved by the order sought.

The provision made by George was significant, It provided a place of residence until Isabelle is 84 and after that a 50% share in the remainder of the estate. The sons are now all in their 60s, had a close relationship with their father and have a longer life expectancy than Isabelle.

In taking account of the above, the Judge ruled that adequate provision had been made for Isabelle from George’s estates and the whole of the proceedings should be dismissed, turning a settlement that had already been agreed with the PTQ completely on its head.

What made this application go so wrong for Isabelle and her legal team?

They’d concentrated on the statutory pre-conditions of s 41 and not the adequacy guidelines and in particular the size and nature of the estate. By concentrating on what Isabelle didn’t have, they forgot to take account of what she had been given and the amount of money actually available.

George’s estate wasn’t big enough to provide for all of his partners and his children’s needs but he had made provision for their future requirements in a meaningful and adequate way.

The moral of the story is perhaps that small estates are both challenging for estate planners and for estate litigators.   Contesting a small estate may produce a most unpredictable outcome.

The above article by Lindsay Chan reminds us of the unpredictable nature of court, particularly for small estates and the strong need for specialist advice sooner rather than later.