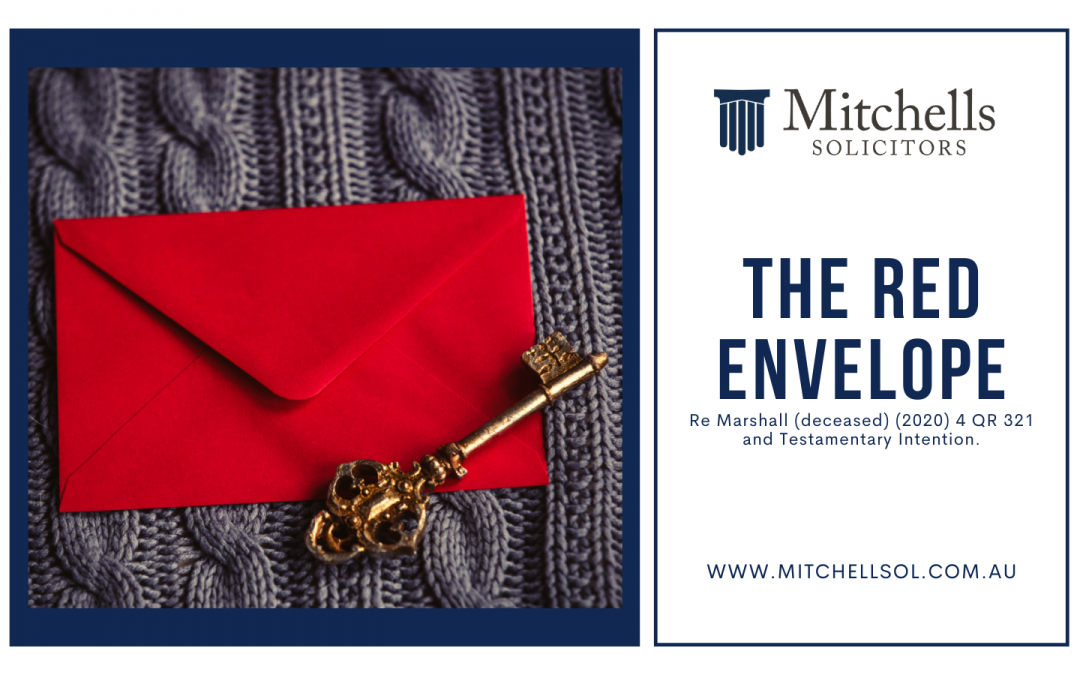 In 2016 Gayle Marshall was thinking about the future. She had suffered a heart attack some months before and her mortality was on her mind. She sat down and wrote the following:

BEING OF SOUND MIND TO HEARBY GIVE MY SON BRENDAN

OF MY AFFAIRS IF NEEDED.

THESE ARE MY WISHES AND THIS MY LAST WILL AND TESTOMENT.

She placed this document in a red envelope, and handwrote in capital letters, “MY WILL, LAST WISHES 21/02/2016” before sealing the envelope with sticky tape and placing it with the rest of her personal papers.

Three years later, following her death, two of her 6 children, Brendan and Jaycob, found the red envelope at the property she owned with Jaycob in Frankston Victoria. The two men searched through all of their mother’s paperwork at the property in Frankston, her address in Queensland and contacted any solicitors their mother had dealt with in the past, but there was no evidence of any other wills.

Brendan, the only one of Gayle’s six children named in her document, had a problem. The document in the red envelope hadn’t been properly executed and if his mother had died intestate the estate would be split equally between the six siblings leaving Brendan unable to fulfil his mother’s wishes.

He sought an order from the court that the document dated 21 February 2016 should be treated as his mother’s will on the basis the Court should be satisfied, pursuant to s 18 Succession Act 1981 (Qld), that his mother intended the document to form her will. He also sought a grant of letters of administration and a declaration that on the document’s proper construction the estate should be distributed to him subject to a testamentary trust.

S18 of the Succession Act 1981 provides that the court may dispense with the execution requirements for a will, alteration or revocation when a document or part of a document purports to state the testamentary intentions and hasn’t been executed if the court is satisfied that the person intended the document to form part of their will.

Brendan was the only child to provide an affidavit to the court in which he said that his mother had discussed her wishes regarding her estate with him on more than one occasion and he was aware that she had also spoken with Jaycob. Although he wasn’t present when the document was written and was unaware of the contents of the red envelope. He swore in his affidavit that his mother had told him that he wanted the estate to be distributed between Brendan and his three brothers, Jaycob, Andrew and Jesse but didn’t want her daughters, Melissa and Hailey to receive anything, as his mother’s relationship with her daughters had been strained and they hardly spoke.

In order to decide whether the document in the red envelope could be deemed as a will, despite the fact it hadn’t been executed, the court now had to consider whether the document appeared to indicate what must happen to Gayle’s estate when she died. They asked 2 questions:

Does the document appear to indicate it is to take effect upon death?

Gayle’s handwritten document stated that it was her last will and testament but there was no indication that the instructions should not be followed until her death. The document also contained the words ‘power of eterny’ which seemed to be a reference to a power of attorney. It was unknown if Gayle had understood the term power of attorney and what that entailed but the use of the words ‘if needed’ and ‘if I cannot’ are not words that are usually used when expressing intentions about their death.

Does the document purport to indicate what should be done with the deceased’s property?

The document is predominantly focussed upon Brendan taking care of Gayle’s affairs and doesn’t indicate how her property should be distributed. It could be argued that there is an implied power upon Brendan to manage his mother’s property on her behalf but there’s no instructions to who should benefit from her property when she dies.

The evidence that Brendan provided about the discussions he had with his mother contained no references at all to the document in the red envelope and there was no connection between the two. The court ordered that there was no indication of Gayle’s testamentary intentions as to the distribution of her estate upon her death and the application was refused.

The document in the red envelope was held not to be a valid will and Brenden was granted letters of administration on intestacy with the estate distributed equally amongst all of Gayle’s children.

Gayle thought that she had done everything possible to make her testamentary intentions known. She had used legal jargon, signed and dated “the will”, and spoke to her son about who she thought should and should not benefit from her estate. But she failed to express those intentions in “her will” and to have it executed properly by having the document witnessed and signed.

Seeking advice from a solicitor who specialises in wills and estates is not only essential in ensuring that your will is properly executed but paramount in the protection of your testamentary intentions. Your solicitor might not keep your will in a red envelope but will make sure that instructions for your estate following your death are properly recorded and implemented.