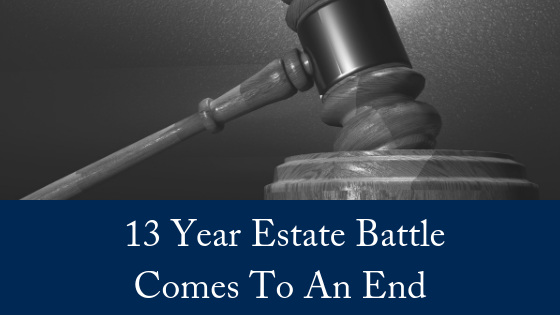 The daughter of world famous sculptor Lynn Chadwick has lost her 13-year estate battle to secure what she says is a ‘fair’ slice of the priceless art collection he left behind.

The artist died 15 years ago, aged 88, leaving a ‘prodigious artistic legacy’ – but even now the division of his estate has not been finally settled. The obstacle in the way has been the ‘long-running dispute concerning the bulk of Mr Chadwick’s works’, Judge Richard Spearman QC said.

His daughter, Sophie Chadwick, 58, claimed the bulk of her father’s works and copyrights formed part of his estate. They should be split equally between his four children, giving her a quarter interest in a collection worth millions, she claimed.

But on the other side of the estate battle stood Mr Chadwick’s widow and Sophie’s step-mother, Eva Chadwick. She controls Lypiatt Studios Ltd – named after the artist’s Gloucestershire home – which was set up in 1973 to market his works.

Eva owns 52 per cent of the company and is a director, as are Sophie’s sister, Sarah Marchant, 60, and her half-brother, Daniel, 49. The artist’s first son, Simon, died aged 75 earlier this year.

Under the artist’s will, Eva Chadwick was left half of Lypiatt Park outright, the other half being placed in trust to produce a life-long income for her. He also handed her two crucial shares in the company, giving her a controlling stake.

The four children were left with minority shareholdings of 12 per cent each, and all his personal possessions were left in trust for them. But the will made ‘no mention’ of Mr Chadwick’s copyrights and tangible artworks, said the judge.

Sophie claimed they were nevertheless owned by him when he died, forming part of his personal legacy. Insisting that they were not tied up with the company, she argued that they should be held on trust for her and the other children.

But Judge Spearman ruled squarely in favour of the company, effectively giving her step-mother a controlling say over what happens to Mr Chadwick’s collection.

There was ‘ample evidence’ that Mr Chadwick wished to assign copyright in his works to the company, he ruled. And he also backed the company’s claim to ownership of the tangible artworks.

Thrice-married Mr Chadwick was in effect an ’employee’ of the company, said the judge, and was ‘properly regarded as part of the company’. A victory for Sophie ‘might have had some advantageous financial consequences’ for her – but ‘that would not be without its price’. It would inevitably have led to a punishing inheritance tax bill and that could have had the ‘the effect of dispersing the artist’s works’, he added.

‘It seems clear…that this would have been contrary to Mr Chadwick’s wishes in his life time.’

Lynn Chadwick launched a glittering artistic career when when he beat Alberto Giacometti to scoop first prize at Venice’s Biennale Festival in 1956.

Over the next four decades the former World War Two pilot turned out thousands of exquisite mobiles and sculptures, many of them on display at Lypiatt Park.

His works attracted top prices in global salesrooms, with his sculpture, Couple on Seat, selling for £1.4m in 2006. His artistic output continued until he was 82.

Eva met Mr Chadwick in 1964, giving birth to Daniel in 1965. She played a key role in organising the collection and marketing his works during nearly 40 years of marriage.

As people live longer and also become increasingly likely to divorce, remarry and start second or third families, the rights of a surviving spouse often conflict with the interests of their dead partner’s children. It’s particularly true when that spouse is similar in age to the stepchildren, who can see an inheritance vanishing into a distant future or being spent in the meantime.

It is important that if you are part of a blended family, you have considered options and solutions to prevent future disagreements. One good option is to utilise a testamentary discretionary trust, so that you have better control over how your assets will be divided. A testamentary discretionary trust is a type of trust created under a will, comes into existence only upon the administration of the deceased estate.

Another option is to create mutual wills which allow for your assets to be divided equally between all the children in your blended family. Mutual wills mirror one another or in other words are identical wills.  In the absence of Mutual Wills nothing will stop the surviving spouse from changing their will and cutting their spouse’s children out of their will or making sure that only their own children are provided for.

For all your estate planning needs, or if you’d like to find out more about contesting a will, please contact us today. We offer a FREE, 10-minute phone consultation.