Want To Save Money On Your Will? The hidden lesson in Re: Demowbray and how saving money is easier than you think when it comes to sorting your estate. 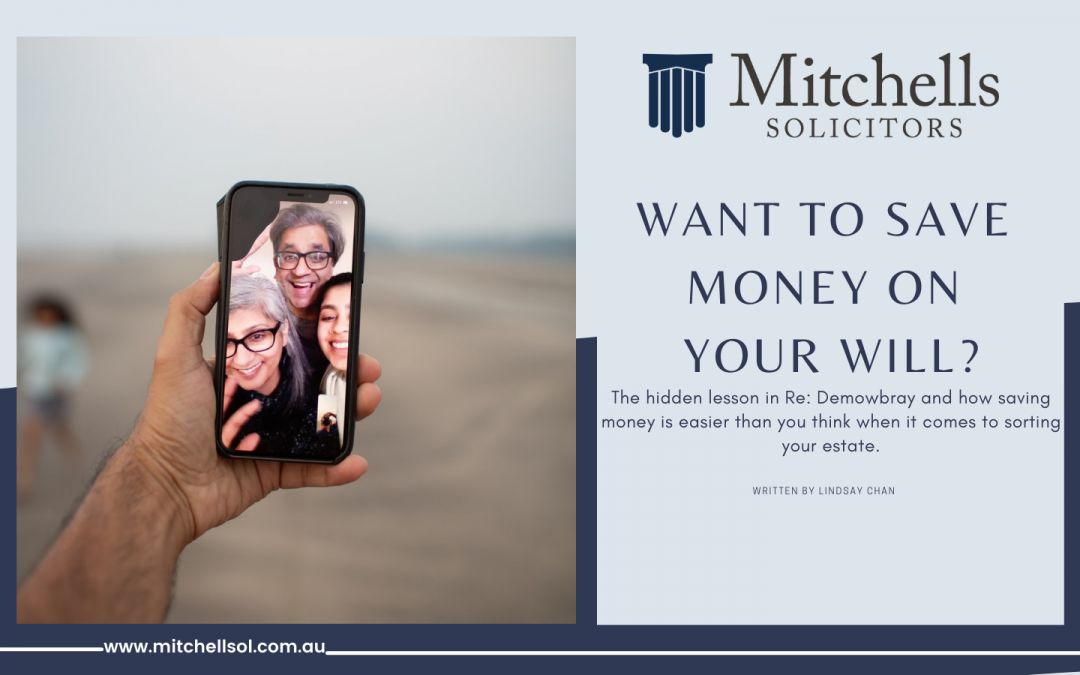 Want To Save Money On Your Will?

The hidden lesson in Re: Demowbray and how saving money is easier than you think when it comes to sorting your estate.

The formal requirements for a will are a bit old school for 2021:

A will must be in writing

The signature of the testator must be made in the presence of at least two adult witnesses. Witnesses must be over 18 years of age. They should not be beneficiaries under the Will.

The witnesses must attest and sign the Will in the presence of the testator.  A person who cannot see and attest that a testator has signed a document may not act as a witness to a Will.

The stipulations above, which are contained in the 1981 Succession Act (Qld) are definitely not 21st Century friendly so it’s understandable that if you have a mobile phone, it’s tempting to forget the antiquated formalities and go save money and time by taking matters into your hands, using technology to immortalise your wishes without the need for appointments and google to avoid the need for expert will drafting.

The problem is, that when it comes to relying on technology to express your last will and testament, it might be more costly on your estate than you could imagine.

Twelve days before Marian Demowbray died, her friend Louis and his partner Fiona came to visit her in hospital and she told them she was dying and would not be coming home. During the conversation, it became apparent that Marian hadn’t made a will and Fiona suggested that they make a recording of Ms Demowbray’s intentions for her estate on Fiona’s mobile phone. Only Fiona and Louis were present in the room when the recording was made but Louis was a named beneficiary (remember rule 3)

a) She contacted the Public Trustee of Queensland and asked if someone could come to the hospital and advise Marian, but no one was available.

c) Finally, the social worker spoke to Dr Kang at the hospital, regarding Ms Demowbray’s capacity. The medical officer confirmed that Ms Demowbray would have had capacity at the time when the recording was made on the previous day, and also at the time when she was assessed on 9 May 2017.

Marian Demowbray died on 20 May 2017 and an application was made to court for the phone recording to be admitted to probate. If the recording wasn’t admitted then Marian’s estate would be intestate and the only beneficiary of the will would be Ms Demowbray’s mother, Mrs Van Straten who wasn’t mentioned in the recording.

It was clear that the mobile phone recording didn’t meet the formal requirements of the will. It wasn’t in writing and signed by the testatrix in the presence of two or more witnesses who are present at the same time.

However, under s 18 of the Act of the Succession Act 1981 (Qld), the court may dispense with the formal execution requirements under the act, by asking the following questions:

(2) did the document purport to embody the testamentary intentions of the deceased, and

(3) is there evidence to satisfy the court that at the time the document was brought into being, or at some later time, the deceased, by some act or words, demonstrated that it was her intention that the document should, without more, operate as her will?

There had already been previous cases where mobile phones had been included in probate so the courts were happy that the mobile phone was contained in the definition of a document and the recording contained very clear instructions that this should be her will.

The recording was admitted into probate.

The Judge, however, had a stern warning for anyone else who thought they’d save costs by disposing of the formalities of the will.

“No one should be encouraged by this, or other decisions of the court, to freely embark on making wills other than with the accordance of formal the requirements of the Act ” he said. In this case, Ms Demowbray declined the offer of a private lawyer to attend hospital to draft the will on her behalf. She did so because she did not want to incur the cost of that exercise. But with great respect to Ms Demowbray, that is a short-sighted economy …

Although Ms Demowbray has avoided the cost of a private lawyer attending the hospital … perhaps a cost measured in a couple of hundred dollars, her estate will be depleted by the much more significant cost that this application will incur.

Wise words from the Judge. The costs involved in instructing an expert to draft your will might be a cost you feel is unnecessary, but the costs of not getting right will be significant and could take weeks and months for the court to grant probate. So if you really want to save money, as well as your executors time, when it comes to will making, the only way to do this is to seek expert advice and stick with the formalities.