Why Women Walk Away From The Family Court 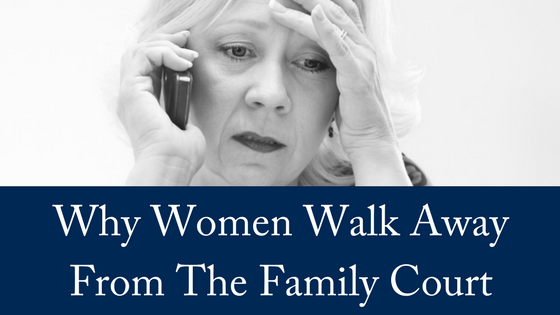 Many disadvantaged women simply walk away from their entitlement to a fair division of property when relationships end because of a lack of quick, affordable ways to resolve family law disputes, according to new research from the Women’s Legal Service Victoria, launched on the eve of International Women’s Day.

Researchers interviewed about 50 clients who had small amounts of property to divide up after separation, with the average size of settlements about $71,000. But these relatively modest sums could make a crucial difference to the lives of these women, who were often battling financial hardship.

Even before matters reached court, two-thirds of women had their claims delayed because their ex-partners were unwilling to make a full and frank disclosures of their financial position.

This meant they had to begin onerous court proceedings, rather than settle matters through negotiation.

The majority of women interviewed – almost 90 per cent – had experienced family violence, including economic abuse, and all said the delays they experienced in resolving disputes only exacerbated their financial difficulties. The Family Court and Family Violence

Critics have also warned that the family court doesn’t deal with issues of abuse and domestic violence seriously. Women who cited their children’s abuse allegations in Family Court hearings, and who sought limited or no contact with the alleged abuser, said the court was taking the children out of their care and handing them to their alleged abuser, limiting them to either no contact whatsoever, or a few hours a week in paid supervision centres. These orders were not made because they were found to be bad parents, they said, but because they were unwilling to support their child’s relationship with the other parent.

The Family Law Act requires judges to make custody decisions in the child’s best interests. But, as Griffith University criminologist Samantha Jeffries notes, judges are overwhelmingly determining a child’s best interests in a way that is “weighted more toward the parental rights of abusers than the safety of children.”

Jeffries notes also domestic violence is “ignored or minimised, re-constructed as inconsequential” or passed off as mutual violence, where both parents are equally at fault. She also points to gendered narratives in Family Court judgments, which “call into question women’s credibility but not men’s (e.g., women manipulate and lie, men are to be taken at face value)… Maintaining abusive fathers’ relationships with their children are the primary consideration in determinations of a child’s best interests,” writes Jeffries. “Achieving this often in the face of overwhelming evidence to the contrary, the judiciary… need to make coercively controlling abuse and intimidation ‘disappear’.”

Family Court judges often have little to no expertise in the dynamics of domestic violence or child abuse. They rely on the evidence put before them to make their decisions, and few pieces of evidence are as crucial – or as influential – as the family report.

The issue has been around for some time. In 2011, there were a number of separate inquiries into the family court system. Three major inquiries into the ability of the family law system to respond to family violence were conducted by the Australian Institute of Family Studies, Family Law Council and Family Law Reform Professor Richard Chisholm. They concluded that the Family Law Act and its principle of equal shared parenting were unintentionally undermining the legislation’s clear aim to protect children from child abuse, neglect and exposure to domestic violence. The result of these inquiries was the proposed Family Law Legislation Amendment (Family Violence and Other Measures) Bill 2011. In a bid to better protect children and other victims of domestic violence, the Bill rightly seeks to define child abuse more broadly to include exposure to violence, remove disincentives to victims of violence reporting abuse, improve courts’ access to evidence of family violence, and make it easier for state and territory child protection authorities to participate in family law proceedings.

Our 56 women’s refuges across NSW often see women who are directed to remove their children from violent partners, but when they prepare their case for the Family Court they are counselled not to raise allegations about domestic violence for fear of being seen as unfriendly to shared parenting and risking a negative custody outcome.

The Australian Institute of Family Studies’ Evaluation of the 2006 Family Law Reforms that surveyed 10,000 couples who had separated after 2006 found that one in five parents reported concerns for their children’s safety during contact with the other parent.

At Mitchells Solicitors, we can handle your family law matter with experience and compassion. For your FREE, 10-minute phone consultation, contact us today.